If, of thy mortal goods, thou art bereft,
And from thy slender store two loaves
alone to thee are left,
Sell one & from the dole,
Buy Hyacinths to feed the soul
Muslihuddin Sadi,
13th Century Persian Poet

When I went to the supermarket today to get supplies for our Nawruz dinner, I bought a pot of three hyacinths. Both the jeweled colors and the intense fragrance remind me of Persian New Year. Hyacinths were one of the chief decorations at the Nawruz concert I attended last year. And the hyacinth (or sonbol) is one of the seven S’s always present on the table at the Nawruz celebration.

My daughter and I were feeling too lazy to prepare a Persian feast so we reverted to our old tradition of eating seven foods that start with S in English: spaghetti, spinach frittata (as close as we got a Persian dish), smoked salmon, strawberries and shortbread with a few new additions: Sauvignon Blanc, Stilton cheese and pomegranate ice cream (sure, it doesn’t start with S but it seemed Persian).

After the meal, I tried drawing the hyacinths. It was difficult as they have so many blooms on a single stem. I tried to count them but gave up. My guess would be 49 flowers a stem (just to continue the theme of 7’s that’s part of Persian New Year).

Hyacinths have their own family: the Hyacinthaceae. The ones I bought at the store are Dutch hyacinths, so named because the Dutch developed over 2,000 varieties of this plant in the 18th century. Hyacinths are native to Turkey and Iran.

There are several myths that tell of the origin of the plant. In one, both Apollo and Zephyrus love a beautiful youth named Hyacinthus, who only returns the love of Apollo. Zephyrus kills him in jealousy and Apollo turns him into a flower. Another Greek myth says the flower was formed by Apollo from the blood of Ajax after he killed himself. Here is a version of the story from a classical Greek text that refers to other sources for Hyacinth myth:
http://www.perseus.tufts.edu/cgi-bin/ptext?doc=Perseus%3Aabo%3Atlg%2C0548%2C001&query=1%3A3%3A3

I got the wonderful quote above from the Persian poet, from my favorite garden writer, Paghat, who has lovely pictures of the hyacinths in her garden and recommendations of how and where to plant them:
http://www.paghat.com/hyacinthwhite.html
According to her, I should be able to plant my potted hyacinths and they will open up and become looser and more natural looking.

Chelsie VandeVeer writes about some of the medicinal uses that the English herbalist, Gerard, ascribed to hyacinths, but warns against trying any of them:
http://www.killerplants.com/herbal-folklore/20020422.asp

Apparently the new Chanel fragrance Chance uses hyacinth along with citron, amber, patchouli and jasmine to produce a sensual fragrance that constantly changes. Based on the glowing reviews of this perfume I read on various perfume web sites, I’m going to have to go find some to try. 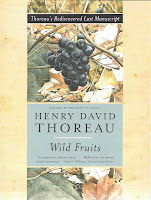 I was at the University Bookstore today, buying my Ukrainian dyes for my annual Magical Egg Dyeing party, and I found on the bargain book table, a copy of Wild Fruits, by Henry David Thoreau. I remember reading about this book, I think in Michael Pollan's Botany of Desire. It was the last manuscript on which Thoreau worked, and I was amazed to discover that it sprang from the same impulse that drove me, nearly a year ago, to begin my blog, in which I hoped to learn about a plant a day.
It seems that after completing his first two books, A Week on the Concord and Merrimack Rivers, and Walden, Thoreau was casting about for something new to write. He became interested in botany, began gathering plant specimens and keeping a journal of his observations. He sometimes referred to his project as his "Kalendar."
He wrote:
I remember gazing with interest at the swamps . . . and wondering if I could ever attain to such familiarity with plants that I should know the species of every twig and leaf in them . . . Though I knew most of the flowers, and there were not in any particular swamp more than half a dozen shrubs that I did not know, yet these made it seem like a maze to me, of a thousand strange species, and I even thought of commencing at one end and looking at it faithfully and laboriously through till I knew it all.
It was this same sense of moving through green mysteries, as I was walking around my urban neighborhood, that started me on my plant-a-day project, that has become a flower-a-week project.
From what I have seen (I have just skimmed through it), Thoreau's entries are like my blog entries. He mentions a plant, makes a few notes about where he has seen it and on what dates, and fills in with any information he's gleaned about the plant.
Bradley Dean of the Thoreau Institute who wrote the Introduction calls Wild Fruits the final harvest of Thoreau's work, presenting his "sacramental vision of nature--a vision compelling in part because it grew out of an approach to the natural world at once scientific and mystical."
That's the integration I'm searching for in my own work. So I'm excited by the prospect of reading Thoreau's notes and following in his footsteps. I'm still trying to think of a clever title, like Julie and Julia (the blog which became a wonderful book chronicling the adventures of a young woman named Julie cooks every recipe from Julia Child's Art of French Cooking cookbook over one year) to herald this new collaboration between me and Thoreau. If you can think of one, let me know.

Posted by Waverly Fitzgerald at 12:55 AM 2 comments:
Email ThisBlogThis!Share to TwitterShare to FacebookShare to Pinterest
Labels: Thoreau, Wild Fruits 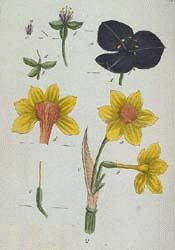 Daffadowndilly has come to town
In a yellow petticoat and a green gown.

It’s March 1, and, as usual in Seattle, the daffodils are in bloom. For the past ten years, I can only recall one year when they weren’t blooming at this time. Lucky for me since I want to wear a daffodil today to show my allegiance to Wales (thanks to my ancestress, Nesta, the mother of the first Fitzgerald, who flourished around 1100).

The daffodil is the national flower of Wales which is why you should wear it on March 1, the feast day of St. David, the patron saint of Wales. Or you can eat a leek on this day and become an honorary Welshman (Cymru as the Welsh would say it). I try to do both.

The David Morgan site in its entry for St David’s Day
http://www.davidmorgan.com/stdavid.html
implies that the daffodil was imposed as a symbol of Wales by the English who wanted to downplay the political implications of the leek (worn by wild Welshmen in battle with the Saxons). Julie Ardery’s article at the wonderful Human Flower Project web site
http://humanflowerproject.com/index.php/weblog/comments/the_leek_and_the_daffodil/
mentions David Lloyd George, the Prime Minister of Britain during World War I, as the person who popularized this custom but he was Welsh himself so it seems more likely he was bringing to the forefront an authentic Welsh custom. The creators of the French Revolutionary calendar must have known of the association of the daffodil with St David’s Day back in 1792 when they designed the calendar and assigned the “narcisse” to this day (the 11th day of Ventose, or Windy).

Daffodil is a common name for a narcissus. It may be derived from the plant name asphodel, known to the Romans. Pliny wrote that it grew on the banks of the Acheron, delighting the spirits of the dead. The Romans planted it on tombs, perhaps because it was said to grow in the Elysian Fields. It was the sight of a daffodil that lured Persephone into the Underworld.

Perhaps it is the way they droop that evokes death. It also gave rise to the myth of the beautiful boy, Narcissus, who fell in love with his own reflection. I will let my favorite garden writer, Paghat, tell you all about the Narcissus myth and the secret rites of Echo practiced during the Eleusinian mysteries
http://www.paghat.com/narcissusmyth1.html

The narcissus common in Greece, Narcissus tazetta, is called Little Tear Drops. In Germany, daffodils are called Osterglocken, Easter bells. They are also called Lent Lilies in England. They are favorite decorations for Easter tables, for Nawruz (Persian new year) celebrations and for Chinese New Year.

Gabi Grieve of the World Kigo database
http://europasaijiki.blogspot.com/2005/04/daffodil-and-narcissus.html
mentions a new holiday in Ireland, Daffodil Day, March 24 which is sponsored by the Irish Cancer Society. Resonating as it does with connotations of both death and hope, the daffodil is used as a symbol by cancer societies around the world.

All daffodils have a central trumpet-shaped corona surrounded by a ring of petals. The traditional color is yellow but hybridizers have bred all sorts of fanciful variations, including daffodils with multiple layers of petals or frilled petals and daffodils with contrasting coronas and petals, or elongated or compressed coronas.

Daffodils come from the Mediterranean but there is one particular daffodil, Narcissus obvallaris, which grows only in a small area around Tenby in Wales. The Narcissus pseudonarcissus is also native to Wales. Julie Ardery writes about the way the winter daffodils bloom in January at Quarrelton in Wales, possibly due to the fires still smoldering beneath the surface in the abandoned tunnels of the mines there:
http://humanflowerproject.com/index.php/weblog/comments/daffodils_for_the_miners/
She also describes how Welsh scientists are cultivating daffodils because they contain galanthamine, which is used in the treatment of Alzheimers.
http://humanflowerproject.com/index.php/weblog/comments/the_mind_of_a_daffodil/

However don’t try this at home. Daffodil bulbs are poisonous. Mrs. Grieve says they are a powerful emetic. Even the flowers are slightly poisonous. However, both bulbs and petals have been used medicinally. The Arabs used an oil of daffodil to cure baldness and as an aphrodisiac.

The oil of Narcissus jonquilla and Narcissus Campernella are used to make a sweet-smelling oil used in perfumes, but Mrs. Grieve warns against being in a closed room as the Narcissus poeticus, or Poet’s Narcissus, as the scent of these daffodils has been known to cause headache and vomiting.

The daffodil is also called the goose leek. In the Isle of Man it is considered unlucky to bring them into the house until the goslings are hatched. In Maine, they say that if you point at a daffodil it will not bloom. And in Wales, if you find the first bloom of the season, you will have more gold than silver this year.

May you find the first bloom of the season.