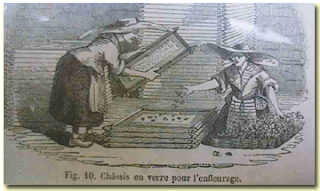 In my last post, where I featured Octavian’s suggestions for reproducing the smell of wisteria, I forgot to mention that it’s necessary to reproduce the scent of wisteria because it’s one of those flowers whose scent cannot be extracted directly. Many of my favorite fragrant flowers fall in this category: lily of the valley, gardenia, tuberose, jasmine, lilac, iris and wisteria. These fragile flowers crumple when exposed to the heat of the steam which is used to distill scent from other hardier flowers (like lavender and rose).

Of course, this didn’t stop people who wanted to capture the scent of these flowers from developing a method to do so. It’s been around since ancient times and it’s called enfleurage, a name which is actually much prettier than the process.

In its most developed form, as practiced in Grasse, the perfume center of France, during the nineteenth century, fresh flower petals are placed on panes of glass which are smeared with purified fat. The fat absorbs the odors of the flowers, which are replenished when they are spent, until the fat is thoroughly imbued with fragrance. Then the scented fat, which is called a pomade, is washed with alcohol which absorbs the scent. The leftover scented fat was often used to make soap. The scented alcohol is called an absolute. If the alcohol is allowed to evaporate, what is left is an essential oil.

There are more primitive ways of creating the same effect, including simply stirring flowers into hot fat until it absorbs their odors. This cheerful article at Mother Earth News explains how to do enfleurage in your kitchen. I’m not sure I agree that you can use rubbing alcohol; I believe my Natural Perfumery teacher (Jeanne Rose) would shudder at this, because rubbing alcohol has a strong odor of its own which would affect your end result.

The illustration of women handling the chassis used in the enfleurage process comes from Sacred Earth which also explains the process, along with other methods used to extract scent from flowers.
Posted by Waverly Fitzgerald at 11:35 PM 1 comment:
Email ThisBlogThis!Share to TwitterShare to FacebookShare to Pinterest
Labels: enfleurage, scent, wisteria

The Scent of Wisteria 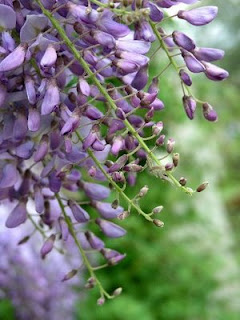 I've been working on a series of essays for the past year about my experiences getting to know the flowers that flourish along the eight blocks I walk between my apartment on the top of Capitol Hill in Seattle and my work at Richard Hugo House, at the corner of Pine and Eleventh. I assigned myself a series of tasks, one per month (I love being a teacher and I love being a student). My task for June is to figure out how to capture the scent of flowers. So I plan to post entries on my experiments and let you know how they are going.

Tonight as I walked home on a sunny summer evening I was noticing the scent of wisteria. To me it has a pleasant, creamy vanilla scent. So I was pleased when I went searching online to see that Octavian, one of my favorite perfume writers (I know him from his comments on Luca Turin's perfume blog) has written an entry at his own blog, 1000 Perfumes, carefully analyzing the scent of wisteria with much more precision than my nose can register.

I hadn't considered the difference color might make in the scent of a wisteria until I read Octavian's entry (though I know from much experimentation that I love the smell of purple irises more than any other color). All of the wisteria on my walk was purple.

A few years ago, when I was learning about wine (in the process of researching a wine mystery novel which never got written), I developed much more discrimination in my ability to identify flavors and scents. As I learn about scents, I am trying to increase my scent vocabulary as well. (Oddly enough many of the scents I encountered today reminded me of banana (and I love the scent of banana, especially artificial banana flavor. I don't know what caused this olfactory delusion.)

What does wisteria smell like to you?
Posted by Waverly Fitzgerald at 12:45 AM 3 comments:
Email ThisBlogThis!Share to TwitterShare to FacebookShare to Pinterest
Labels: perfume, scent, wisteria
Newer Posts Older Posts Home
Subscribe to: Posts (Atom)