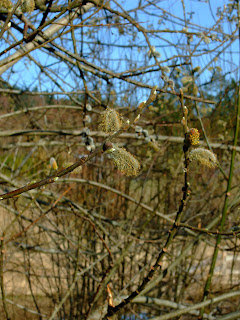 Growing up in Southern California, we never saw real pussywillows (except as imported curiosities). They were captive items, like peacock feathers or Mexican jumping beans. They stayed frozen in their soft furry grey velvet form forever.

From then on, I kept my eye on the bush and came to know all its phases. I love it best when the buds are just showing that flash of milk white, before they open. No, I love it best when the stems are studded with those soft, furry grey velvet puffs, like tiny rabbit feet. I have a vase of them sitting in my window in front of me at my writing retreat. They were blown off this tree in the high wind that came up several nights ago and I found them on the side of the road. They don’t seem to be opening despite the warmth of the cottage, which is just fine.

But I do love the next stage. Here they are on the same tree a few days later, popping out, covered with yellow pollen. I will be eager to get back to Seattle and see how the ones in my neighborhood are progressing.. I think because Seattle is warmer they will already be littering the ground.

I’ve been reading Bill Felker’s list of March Zeitgebers from Poor Will’s Almanac. In Yellow Springs, Ohio, he predicts pussy willow catkins will break in the second week and pollen will appear on the catkins in the fourth week.
Posted by Waverly Fitzgerald at 10:15 PM No comments:
Email ThisBlogThis!Share to TwitterShare to FacebookShare to Pinterest
Labels: march, pussy willow, signs of spring 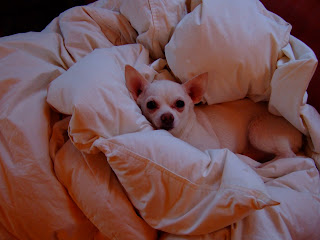 I was thinking about the difference between city dogs and country dogs, when I was walking into town yesterday. My daughter's dog, Pepe, seen above in a nest of down comforter, is definitely a city dog.

Though we both harbor the fantasy of buying land in the country, partly so Pepe could just run outside whenever he wanted to pee, I don't think he would last more than a few days. There was an eagle drifting overhead as I was walking into town and I think Pepe would look like a great snack to an eagle. Ditto to an owl. Last night one of the resident owls at Hedgebrook ate one of the resident bunnies.

It struck me that a dog like a Chihuahua (and probably other toy dogs), are designed to be city dogs. They are status symbols, like long fingernails or white carpets, that say, I don't have a dirty job. They signal class and wealth, which is probably why Paris Hilton flaunts them. (I'm not sure what Mickey Rourke is doing with a Chihuahua, but it is adorable to see that ravaged, rough-looking man cradling the small, big-eyed dog against his chest.)

The country dogs here seem to be working dogs, dogs like collies and shepherds that are bred for herding skills, or guard dogs, like the yappy Chow mix at the farm down the road. On my way back from town, I saw a border collie mix crossing the street in front of me. He just stopped in the middle, his ears cocked in my direction. He stood there for about 45 seconds, then loped up a long drive into the woods. About three minutes later, a car approached from town and turned up that same drive. The dog had apparently recognized the sound from miles away and was heading to his post, to greet the members of his family when they disembarked.
Posted by Waverly Fitzgerald at 5:02 PM 7 comments:
Email ThisBlogThis!Share to TwitterShare to FacebookShare to Pinterest
Labels: city dog, country dog 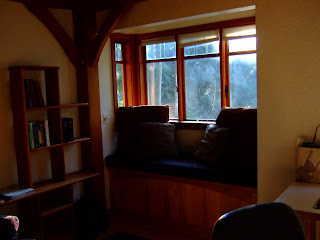 A picture of the window seat in my cabin where I sit and look out at the trees (and occasional snow flurries) and read some of the books I've brought: the Culture of Flowers by Jack Goody and Essential Oils and Hydrosols by Jeanne Rose.

Here I am on a two-week writing retreat. I imported all the books I thought I needed (and the ones I didn't bring I ordered at the local library). I brought my new cute laptop and new flash drive and found the recharger for my digital camera so I could take pictures and show them to you. And I brought notebooks galore, warm clothes, some earrings, even. But what am I missing the most?

I went into town to try to buy some and I couldn't find any at the store. It seems silly. Even wasteful to use post-it notes when I have scratch paper, but I find I'm very attached to them.
Posted by Waverly Fitzgerald at 11:09 PM 2 comments:
Email ThisBlogThis!Share to TwitterShare to FacebookShare to Pinterest
Labels: hedgebrook 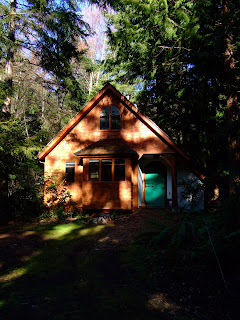 I realized that while away on my writer’s retreat I could still post entries to my blog because the Internet is everywhere. Even here in this idyllic retreat for women writers called Hedgebrook on Whidbey Island.

We don’t have internet access in our cottages but we can walk a brief distance through the woods (a spooky walk at night by the feeble light of my eco-friendly flashlight) to a little shed called the Pumphouse which connects us to the outside world via phone and an internet connection. (Cell phones don’t work too well here. At least mine doesn’t.)

We’re encouraged to stay off the grid as much as possible, since we’re here to write. And I have been writing for the past four days. Working on a commissioned piece for an art jewelry journal. Beginning an essay on plant identification. Polishing up one I wrote long ago on the names of plants. Considering new possibilities for my Victorian ghost novel.

It’s an amazing gift for a writer. To have nothing on my schedule but writing. That and sleeping and eating and reading and making tea and keeping a fire burning in the wood stove. 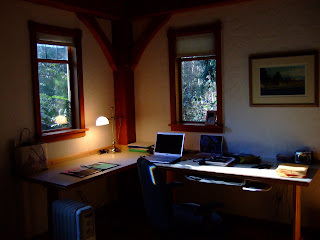 I want to live in this cottage for the rest of my life. Finally, a desk big enough so I can spread out all my projects. A tiny kitchen, perfect for one person. A cozy armchair with a footstool and a lamp. A windowseat that looks out on the woods. A wood stove to stoke; it keeps the kettle hot enough so I can make a cup of tea anytime I want. The bed is up a ladder in the loft. The windows have leaded glass panes so prisms dance around the room when the sun is out.

There are seven writers here at the moment and all of them are fabulously talented, so talented I sometimes wonder what I’m doing here. At night we meet at the farmhouse where we are served a fabulous dinner. We talk about writing over this gorgeous food and that is a luxury too.

When we leave to go back to our cottages, we are carrying our flashlights and our baskets laden with the lunches that were made for us (mac and cheese tomorrow) and the fixings for breakfast (I’ve been grooving on oatmeal).

Tonight I walked up the road under the stars. The first quarter moon was so bright I didn’t need my flashlight. The frogs were chirping in the pond besides my cottage as I crossed over the bridge and saw the welcoming lights of my cottage.

I’m already counting the days until I go home (ten), not because I’m eager to leave but because each one is precious.
Posted by Waverly Fitzgerald at 12:31 AM 4 comments:
Email ThisBlogThis!Share to TwitterShare to FacebookShare to Pinterest
Labels: hedgebrook 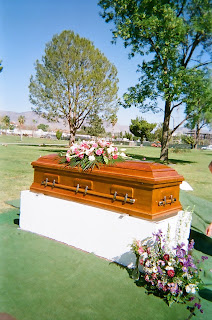 You might have noticed that I disappeared for a while there. I've been struggling with a persistent cold ever since the last week in December. It recurred twice, once in January and once at the end of February, knocking me out for a week each time. Meanwhile I got the news on February 4 that my mother was dying.

It was not a surprise. She has been in a long decline starting in 1999 when she had a major heart attack. She was already suffering from short term memory loss and that progressed into Alzheimers. She lived in a succession of nursing homes and rest homes for the past nine years. In the last few months, she slept most of the time, like an old cat.

My daughter, Shaw, and I rushed down to Ventura and were able to be with her in the hospital for two days. We took shifts and I was with her when she died in the early hours of February 6. Although her death was peaceful, being with her was not easy. I wished I had taken more time to think through how to create a sense of sacred space in the hospital room. I should have talked to my friend, death midwife, Nora Cedarwind, who has made it her life's work to bring dignity and beauty into the dying process.

We were blessed with the presence of a priest who came to give my mother the Anointing of the Sick, after my daughter insisted my mother would want this Catholic ritual. And after my mother died, we were comforted by the services provided by the funeral home and the rituals of the Catholic Church. It was clear both were the result of years and centuries of considering what people need when they are experiencing loss and grief.

Perhaps the most surprising moments during this whole process happened at the cemetery. My sister, who is an engineer, wanted to see how they would lower the coffin into the ground. So after the burial service, we stayed to watch as the cemetery workers with shovels and bulldozer lowered the coffin into the vault and the vault into the ground and then shoveled the dirt back over it. (I wish we had stepped forward at this point to shovel dirt ourselves but we weren't invited to do so and so we didn't.) Then they carefully laid back down the strips of sod they had removed and replaced the headstone (which marks my father's resting place) and laid the big bouquet of flowers on the green grass. It was an amazing end to an intense process, to look back, as we walked towards our rental cars, and see the lilies and roses lying on the green grass.

Although it seems my mother's death should be a sad event, it was not entirely sad. It was also beautiful and disturbing, peaceful and exhausting. Here's a picture of my daughter on the beach that captures a certain sense of grace about our trip: 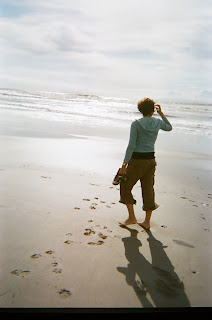