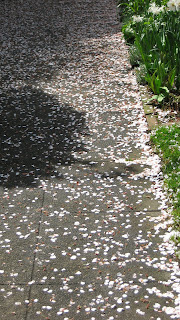 This is one of my favorite times of the year. I call it the season of the Pink Rain, when the cherry petals drop and carpet the sidewalks. 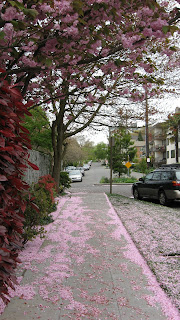 The picture on the left was taken on April 28, when the sidewalks were peppered with petals like confetti. 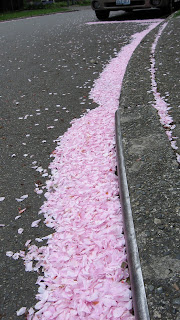 The next two photos were taken on May 7 when the dusting of petals had become a carpet, filling the gutters with pink rain. 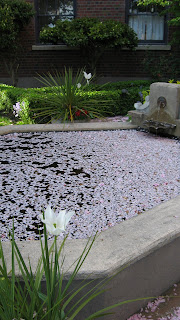 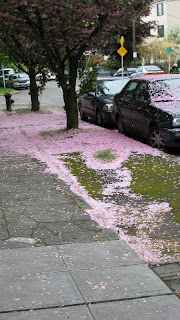 These last two photos were taken on May 14 and May 16 and show the heaps of petals covering parked cars and covering the surface of a decorative pool in front of an apartment building. The pink rain is almost over, alas!
Posted by Waverly Fitzgerald at 12:46 AM 7 comments:
Email ThisBlogThis!Share to TwitterShare to FacebookShare to Pinterest
Labels: cherry blossom, pink rain

A Trip to the Iris Farm in my New Car 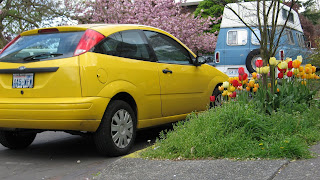 On Mother's Day, I made a quick trip down to Schreiners Iris Farm just outside of Salem, Oregon. It's a pilgrimage I plan every year but seldom execute. This year the leisurely trip I planned ended up crunched into one grueling day of driving. But it was all so much more pleasant because I was driving my new car, which I bought last Mother's Day. That's a whole story in itself. I just thought I would celebrate the ease it has brought me. It's a 2007 Ford Focus and it really looks good parked next to my neighbor's tulips. I'll post more about the iris farm trip in a few days.
Posted by Waverly Fitzgerald at 10:59 PM No comments:
Email ThisBlogThis!Share to TwitterShare to FacebookShare to Pinterest
Labels: car, iris farm, Mother's Day 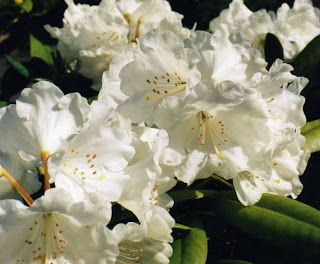 Ever since I read the book Tales of the Rose Tree by Jane Brown and learned that the earliest rhododendrons, brought to from and by plant explorers, were fragrant, I’ve been searching for a fragrant rhododendron. is rhododendron city; there’s a rhodie on every block, practically every yard. It’s our state flower after all. But, despite sniffing every rhodendron I passed, I couldn’t find one with any scent. That’s partly because, as with other highly hybridized flowers, the scent has been bred out of them in favor of big blossoms and vivid colors.

Then on May 1, when I was leaving the and Industry after a great reunion of Nearby History participants, I smelled the most intoxicating fragrance. I looked around and the only blossoms in sight were on a huge rhododendron with large white flowers. So I thought I would try sniffing the blossoms. Ah! A heavenly aroma. A truly fragrant rhododendron.

A few days later, I was celebrating an impromptu May ceremony with some friends, tossing wreaths into the lagoons at the end of the Arboretum, when I saw another white rhododendron, right next to the gatehouse that leads into Broadmoor. I pointed it out and we went over to smell it. Again, that intoxicating fragrance, a lot like honeysuckle. We stuck our noses deep into the blossoms to inhale the scent and when we raised our heads, there were smudges of pollen on our noses and sticky pistils. The flower had lured us, hapless pollinators, to spread its seed around. A perfect ending for May Day.

The photograph above is not either of the bushes described but it may be the same cultivar. This is Polar Bear and it’s a fragrant rhododendron offered for sale by Banwy Valley Nursery in the .

The Berkeley Horticultural Nursery has a wonderful list of fragrant rhododendron cultivars.

I was especially fascinated by the distinctions made in describing their scents. Bill Massey is very fragrant with cinnamon/chocolate overtones. Fragrantissimum smells of honeysuckle and nutmeg. And Fragrantissimum Improved has “an almost tropical fragrance with nuances of jasmine and cloves.” McNabbi smells like nutmeg and Mi Amor has hints of musk and tarragon. Paul Molinari has the scent of wild honeysuckle (I have a feeling this is the cultivar I enjoyed) while Scott’s Valentine smells like jasmine. It’s enough to make me run out and buy some rhododendrons for my garden.

One thing this flower project is doing for me is making me fall in love with flowers I always disdained (like the bergenia and the big showy, scentless rhodies).

Posted by Waverly Fitzgerald at 12:18 AM 3 comments:
Email ThisBlogThis!Share to TwitterShare to FacebookShare to Pinterest
Labels: birthday flower, May, rhododendron, scent 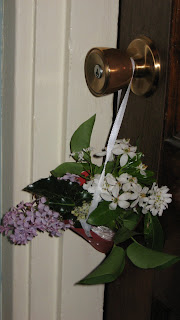 As we do every May Eve, my daughter and I went out last night at midnight and wandered around our neighborhood in the dark, armed with bags and clippers, looking for fragrant flowers in the parkways and the alleyways (where we consider them fair game). This year, to our astonishment, there were no lilacs in bloom (except at the very top of the bushes where we couldn't reach them). We brought home a few buds hoping to force them in the warmth of our house but with no success. This tells me that spring is truly late this year (I've been refusing to believe it, since other flowers, like the daffodils, bloomed on time.) The only May flower which is blooming on time is the sweet woodruff, the plant traditionally used to flavor May wine.

The picture of the little basket is from last year when we had a better haul, and shows one of the offerings we left on all the doorknobs in our apartment building. This year we simply filled all the vases in our apartment.

Are your May Day flowers blooming on time or are they late, like ours?
Posted by Waverly Fitzgerald at 12:12 AM 4 comments:
Email ThisBlogThis!Share to TwitterShare to FacebookShare to Pinterest
Labels: lilac, may baskets, may day
Newer Posts Older Posts Home
Subscribe to: Posts (Atom)