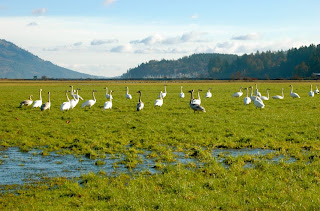 At the end of the week, I went away for a three-week mini-retreat which I created and orchestrated so I could have three friends help me figure out what I am doing with my life during this upcoming year. One was Joanna, my web designer, who inspired me to create the School of the Seasons web site, ten years ago. Another was my friend, Noelle, a talented life coach. And the third was Whitney, who specializes in marketing and development for small businesses.

As I walking to my car, I passed two crows eating a dead rat (or mouse?) that was lying in the road. was experiencing a sunny spell, with balmy breezes and blue skies. But as I headed north to where we met, I watched ribbons of rain streaming down from a dark bank of clouds. I wondered about these omens.

When I left , it was raining. I took a wandering course home, along the coast, and through some lovely farmland. Ahead of me the clouds were dark but I could see golden sun streaming out from behind them. And I passed a field full of white swans (they like to over-winter in the ). That seemed like a good omen.

I found this Youtube video of trumpeter swans in the . It makes it clear why they are called trumpeters.

Posted by Waverly Fitzgerald at 12:41 AM No comments:
Email ThisBlogThis!Share to TwitterShare to FacebookShare to Pinterest
Labels: retreat, Skagit Valley, swans

Shedding for the New Year

This new year I’ve been feeling really bogged down by all of the clutter in my house. I thought I would get it all cleared out during the week I was off work after Christmas but, of course, that didn’t happen.

I accidentally watched part of an episode of the TV show Hoarders last year. I don’t recommend it for anyone who has any hoarding tendencies--I’ve been horrified ever since at the prospect that I might become one of those old ladies who lives in an apartment with little paths between the stacks of newspapers. But this tendency does run in my family. My Uncle George, who was the family eccentric in my Mom’s family, apparently had an apartment like that (he also had about a quarter of a million dollars in his estate when he died—unfortunately that part of the hoarding gene seems to have passed me by).

It’s hard to launch into the new year when you’re carrying the weight of all that clutter, all those unfinished projects, all those unread magazines, all those unsorted photographs. And I’m noticing this same theme among the participants in my New Year Dreams class.

I’m hoping that this is all due to the backwards influence of Mercury and Mars both being retrograde at the same time. Madeleine Gerwick, the author of the popular Good Timing Guide says not to initiate any new projects until March 20. That might give me enough time to clear and organize my house.

I’m also reading Julie Morganstern’s new book. I’m a big fan of Julie’s work. The four-step system she explains in her Organizing from the Inside Out book has been very helpful to me. The first step is sorting, and the second step is purging. The third step is containing (finding the right space for the stuff) and the fourth step is maintaining the system you’ve developed. You can use this with clothes, with papers, etc. Over the summer, I used it with my books (and actually got rid of some--a first!).

Her new book, Shed Your Stuff, Change Your Life, is more about how to get rid of stuff you’re holding onto, and she extends it from clutter in your house to clutter in your schedule to bad habits in your personal life. Again, she has come up with a simple system and an Acronym to remind you of it in SHED. First you Separate the treasures from the trash in your life, then you Heave the trash. The final two steps are Embrace your Identity and Drive Yourself Forward.

What I especially like is her focus on the end result. What are the values you are trying to manifest in your life? And do the items in your house (or schedule or life) serve your purpose/help you achieve your goals?

Once you identify the arena in which you want to work, you create a list of entry points, for instance, the pile of unread magazines, the box of unsorted photographs or the box full of old Christmas cards. Then you choose the point which will cause you the minimum amount of difficulty and get you the maximum amount of effect. This is about where I am in the book so I don't know yet how it will work out. But I have until March 20 to carry out all the steps.

Do you have a system that works for you?

Posted by Waverly Fitzgerald at 12:58 AM 3 comments:
Email ThisBlogThis!Share to TwitterShare to FacebookShare to Pinterest
Labels: clearing, new year's ritual

The Scent of Spring 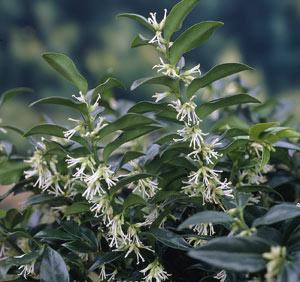 The first sign of spring for me is always a delightful flowery fragrance that I call the Scent of Spring.

This year I smelled it for the first time on January 8, just outside the front door of an apartment building in my neighborhood.

The next earliest smelling (can't call it a sighting) was January 18 in 2004, so this is really early.

When I got home that night, I saw that the sweet box (Sarcocca humilis, also known as Christmas box) outside my apartment building was already in bloom. So that might be the Scent of Spring. Although my friend Janis mentioned that she smelled a daphne odora the other day, so it could have been a dahpne rather than sweet box.

Whatever it was, I know spring is coming soon. What is the first sign of spring where you live?

This blog entry was cross-posted at my new blog