These blog posts are now being cross-posted at my new magazine, Living in Season. Check there for more feature articles. 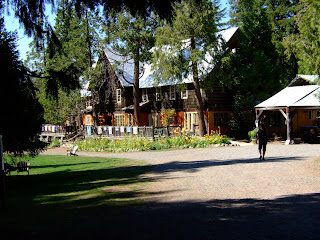 Just got back from attending the Herbal Conference at Breitenbush Hot Springs. I haven't been to Breitenbush for 17 years, yet it felt so familiar that I wondered if I had simply forgotten a previous visit. Five years ago, I would have called this feeling deja vu. Now I simply wonder if I am losing my memory.

Perhaps it felt familiar, because it was so comfortable. I could sit down besides anyone and immediately fall into a meaningful conversation. And I had friends there--my herb teachers, Eaglesong and Sally King--and I met a School of the Seasons reader: Carmen, who won the Sniffathon (I only placed third). (The Sniffathon involved correctly identifying drops of essential oils dripped onto index cards.)

I always have a hard time at group meals, after I've filled up my tray and have to find a place to sit (bad memories from my year at Reed College). But on Friday night, I was lucky enough to sit at a table with two women who became my new Best Friends: Mary Lou and Amber. Amber was a green-haired, tattooed, 21-year-old from Dallas who had driven to the conference on her own and was camping for the first time in her life in a tent borrowed from her grandfather. I loved her energy and excitement and enthusiasm about everything. She also had that great Texas twang and Southern generosity. When I wandered late into my first class, she made sure I got a handout. Mary Lou was closer to my age but like Amber, she was also at a crossroads, since she had just quit her job as a dietitian for a nursing home and was searching for something meaningful to do with her passion for healthy foods and herbs. She was in every class I took and probably ended up taking the one class I missed, after I developed a bad headache.

It was ironic that I left a conference full of healers because I was sick but I'm one of those folks who when sick, wants to crawl off into the bushes, rather than admit I need help. And I'm a bit embarrassed to admit it was probably mostly caused by caffeine withdrawal (no caffeine served at Breitenbush--just vegetarian food and herbal teas). The headache started to ebb after I stopped at the first rest stop with free coffee.

So did I learn anything new about herbs? Not as much as I expected. Mostly I learned about nutritional anthropology and metabolic types and intuitive eating (that's Paul Bergner's term--I loved it--it means asking your body to inform you of what it wants for your highest good). I also learned about stress and susto (as it's called by healers in Belize where Rosita Arvigo lives and works, fright in English) and how the production of adrenaline and subsequent crash (the body's response to trauma) can create imbalances that can later be treated by herbs, vitamins and nutritional supplements (Leslie Korn's methods) and spiritual practices (Rosita taught a great class on spiritual bathing). I also went on a great plant walk with Paul Bergner where he taught us to draw plants by memory. More about this later.
Posted by Waverly Fitzgerald at 11:11 PM 2 comments:
Email ThisBlogThis!Share to TwitterShare to FacebookShare to Pinterest
Labels: Breitenbush, herbal conference, herbs 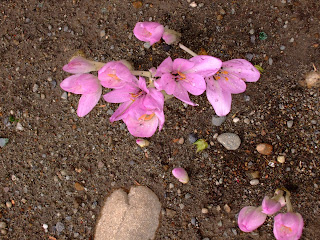 These entries are now being posted both here and at my new web site, Living in Season.

Tell me of what plant birthday a man takes notice, and I shall tell you a good deal about his vocation, his hobbies, his hay fever, and the general level of his ecological education.
Aldo Leopold, A Sand County Almanac

For Leopold it’s the cutleaf Silphium, blooming in the corner of an old cemetery. For me, it’s the autumn crocus, blooming on my birthday.

It always catches my by surprise, even though I watch for it as my birthday approaches. I didn’t see a trace of it in its usual habitat but coming home from a BBQ on Sunday night, I spotted the autumn croci (above) springing up from the dirt outside an apartment building. 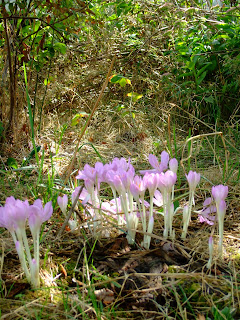 Then on my way to work today, I found them in the place I’ve grown accustomed to seeing them. With the sunlight shining on them, they truly resembled “the lamps of the ghoul,” the name the Arabs give this plant (according to Wilfrid Blunt) because they are so poisonous. Other common names: naked nannies and bare-bottoms.

So what does that say of me, that this is the plant birthday I notice?
Posted by Waverly Fitzgerald at 12:04 AM No comments:
Email ThisBlogThis!Share to TwitterShare to FacebookShare to Pinterest
Newer Posts Older Posts Home
Subscribe to: Posts (Atom)