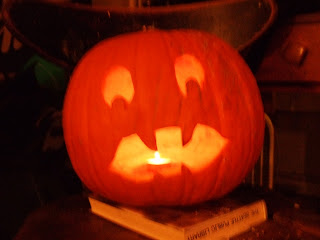 This is our Halloween pumpkin for this year, carved by my daughter.

A reader commented last year that pumpkins are truly folk art. People make an effort to acquire a perfect pumpkin and carve into its orange flesh a truly unique expression, one that hasn't been seen before. And then we share our creative projects, proudly, by displaying them on front porches for everyone to see. When else do we feel so unselfconscious about displaying the fruit of our artistic efforts?

Last year I went crazy photographing pumpkins in my Capitol Hill neighborhood in Seattle. It seemed like there were many more than there are this year. This year I have only seen two on my way to work. I wonder if that means anything.
Posted by Waverly Fitzgerald at 11:45 PM No comments:
Email ThisBlogThis!Share to TwitterShare to FacebookShare to Pinterest
Labels: Halloween, pumpkin 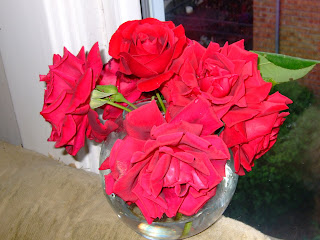 I haven’t posted anything about making my rose hydrosol because I was disappointed in the end result. I have yet to make anything from roses that actually captures the amazing fragrance they exude.

I’ve been using the petals of an old red rose that grows in the abandoned lot across the street. It’s my secret treasure, since it’s hard to find a rose in my urban neighborhood that I can be sure isn’t sprayed. Since this rose is entirely neglected (except for my feeble attempts at pruning it this year), I know it’s safe to harvest the petals.

They smell absolutely marvelous and look beautiful in the vase when first picked. But they don’t last long—they wither and go limp within a few days, as is true for many older roses. The newer varieties have been bred to last longer in the vase at the cost of the scent. The very chemicals that diffuse fragrance also age the flower.

The rose petals smelled wonderful while cooking in the pan but the rose water I collected had a slightly musty smell. I bottled it and put it in the refrigerator anyway, thinking maybe it would get better. A few days later I added glycerin to the hydrosol to make it last longer but it still smelled unpleasant. I realized I was never going to use it, so I poured it out.

I don’t know the secret of how to capture the fragrance of the rose but maybe I will learn next weekend when I attend Jeanne Rose’s workshop on Natural Perfumery in Los Angeles.
Posted by Waverly Fitzgerald at 12:07 AM 1 comment:
Email ThisBlogThis!Share to TwitterShare to FacebookShare to Pinterest
Labels: hydrosol, rose
Newer Posts Older Posts Home
Subscribe to: Posts (Atom)