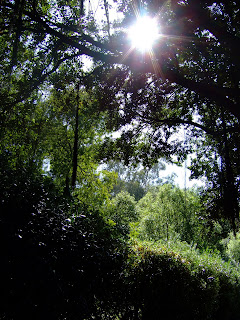 In my latest newsletter, I mentioned that I was overwhelmed by the prospect of writing eight or nine articles every month for my Living in Season magazine, and all sorts of readers have stepped forward, offering to share with me their ideas and writing. I am slowly making my way through the responses, and learning so much as I go.

For instance, Debra Redalia sent me a link to her blog, Rooted in Nature, and I loved her last blog entry about a new web site she discovered, Gaisma, (the name is Latvian for "light")which provides stunning graphs showing the amount of sunlight at different times of the year. I've found this information on other web sites but not with such clear visuals.

I played around with several scenarios, including my location (Seattle) and Costa Rica near the equator. In Costa Rica, the difference between the amount of sunlight at Midsummer and Midwinter is 1 minute. In Seattle, it's 7 and 1/2 hours. I like sunshine but I'm not sure I would like living in a place where the amount of light was so even all year around.

Photo of Golden Gate Park taken during my recent trip to San Francisco.
Posted by Waverly Fitzgerald at 11:54 PM No comments:
Email ThisBlogThis!Share to TwitterShare to FacebookShare to Pinterest
Labels: summer solstice 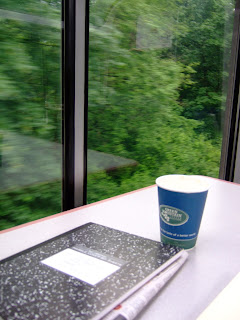 I took the train to to take a one-day workshop on distilling essential oils from plants with legendary herbalist, Jeanne Rose.And I chose the train for two reasons: 1) taking the Coast Starlighter is on my list of things I want to do in my lifetime and 2) I hate air travel and I wanted to find an alternative mode of transportation.

Before I left I envisioned the train as a sort of coffee shop where I could sit with my laptop in front of me and read and write, while gazing out the window at stunning scenery. The stunning scenery is there (except for half of the 22 hours it was dark so no scenery whatsoever) but I couldn’t really plug in my laptop and use it at my seat because I had an aisle seat and I didn't want to drape the cord over my seat mate. And there's no wifi on the train.

The people you meet on the train are fascinating. My seatmate was a guy named Ted who’s on his way to meet his wife with whom he’s going to drive a semi trailer full of cooking equipment across country for Amma’s summer tour. We chatted for hours. He was as distracting as the scenery. And over dinner I met a man who was born in the same hospital I was in the same year, and grew up about a mile from where I grew up. He told us all about the five years he lived in the woods with his wife and kids after he got back from Vietnam, building a log cabin by hand, going out every day to forage and hunt for their food.

But I do have several complaints about the train, besides these pleasant distractions and beautiful scenery (waking up at dawn to see the silhouettes of palm trees against the golden sky—enchanting!). There is no privacy—every conversation you have—by cell phone (which is frowned upon) and with your seat mates or table mates, is overheard. It is impossible to sleep in a coach seat (perhaps it is possible in a window seat but I couldn’t get the conductor to assign me one despite the fact there were plenty in my car).Of course, there are sleeping cars but they are very pricey, especially for a single person.

In fact, the train discriminates against single people. If you're a couple, you have seats side by side and can sleep draped over each other. But the conductor sat me next to another single person rather than giving me a window seat because he was "saving" those seats for the couples who might board the train later. Also the tables in the lounge car were reserved for two people, which meant I was scolded for sitting at a table with my laptop. I must admit most people used the lounge car as an opportunity to meet and talk to new people and the most interesting conversations were going on all around me. One woman was practicing her Spanish with a Spanish speaker.

However, I'm one of those introverts who is totally drained by too much socializing. I need my time alone to recharge. So the train is not really ideal for me. Also I am no good without sleep and I've never been able to sleep in cars or on airplanes, so it's possible I could not sleep on a train, even if I had a window seat.

I arrived in Oakland totally fried, way too tired to think. Now it's two days later and I'm sitting in a charming little coffee shop one block from the Haight and three blocks from Golden Gate park and drinking a great latte (all the lattes in San Francisco are served in glass carafes! very European).

Tomorrow night I get back on the train for a 22 hour trip to Seattle. I wonder how that will go. I thought about buying an airplane ticket but I just can't convince myself to get on an airplane. Not since I've seen what it's like to travel along the ground, seeing the landscape through which you're passing, the junkyards and the fields of grass, the glacial rivers and the back yards of little wooden houses, elk in the meadows and deer in the woods.