For years, my holiday calendar contained a reference to the silent, gliding dances of the Bon Odori perfomed during the O-Bon festival in . The image always seemed marvelous to me, and even more so, when I read this fantastic description of the dances written by Lafcadio Hearn, in 1894:


And at another tap of the drum begins a performance impossible to picture in words, something unimaginable, phantasmal—a dance, an astonishment.

All together glide the right foot forward one pace, without lifting the sandal from the ground, and extend both hands to the right, with a strange, floating motion and a smiling, mysterious obeisance. Then the right foot is drawn back with a repetition of the waving of hands and the mysterious bow. Then all advance the left foot and repeat the previous movements, half-turning to the left. Then all take two gliding paces forward, with a single simultaneous soft clap of the hands, and the first performance is reiterated, alternately to right and left; all the sandaled feet gliding together, all the supple hands waving together, all the pliant bodies bowing and swaying together. And so slowly, weirdly, the processional movement changes into a great round, circling about the moonlit court and around the voiceless crowd of spectators.

The Bon Odori dances are part of the O-Bon festival honoring the dead, who return to visit their families at this time of the year. The festival is celebrated on the 15th day of the 7th month in Japan (July 15; although in some parts of Japan it’s celebrated on August 15), but it used to be celebrated on the full moon of the seventh lunation in the Chinese calendar, which would be the full moon of July 25, which is also the Moon of the Hungry Ghosts. Like our Western festival of the dead, Halloween, this holiday mingles several elements: the traditional end of the summer retreat for Buddhist monks, the Full Moon of the Hungry Ghosts, and a midsummer lantern festival. The dances were designed to welcome and honor the spirits of the ancestors; one can see that reverent and otherworldly aspect of the dances in Hearn’s description.

A few years ago, my friend, Susan told me about the O-Bon festival held at the in . And I finally got a chance to see the dances. My first impression was that they were not particularly gliding. And they are not silent: each is accompanied by recorded music, which is played on a loudspeaker, accompanied by a drummer. The crowd gathers in the street and makes a long shuffling circle around the yagura, a temporary stage set in the middle of the street, from which the dances are announced and where the drum is placed. In , everyone is invited to participate, even if you don’t know the dances, and so the crowd is diverse, with people dressed in traditional summer kimonos and people in jeans and flipflops, some who perform the dance elegantly, others who look lost and are always off the beat. Some of the dances are quite playful and whimsical. The Wikipedia article on Bon Odori describes some the various dances, some of which are quite old and others which come from popular culture, for instsance, the Pokemon ondo. Another website, which calls the Bon Odori dances, the spiritual dance in the midsummer night, provides descriptions and videos of several types of bon odori dances.

I was a little disappointed that first time, although I enjoyed the friendly crowd, the camaraderie of the dancers, and the generosity of the Buddhist temple which opens its doors to make this festival possible. It has the atmosphere of any small community event, complete with princesses (beautiful young women wearing tiaras and kimonos), food booths, a beer garden, a display of crafts (including ikebana arrangements and bonsai trees), and little kids sitting on the curb to watch the dancers lining the street.

But this year, I attended the festival again with my niece, Shayla, and this time I really did see the gliding dances of my fantasy. Perhaps this was because the temple sponsored practice sessions during the weeks before the event (you can see one in this You Tube video) and more of the dancers knew what they were doing ahead of time. Perhaps it was because of the elegant grace of the dance leaders, women in pink kimonos who walked alongside the dancers, demonstrating the movements. But suddenly, I could see how the gestures were intended to welcome and honor the spirits. I watched the dancers move slowly along the street, in a gliding, undulating line. And I saw all the elements Hearn saw in 1895: the swaying, the supple hands, and most of all, that sense of otherworldliness. No silence, but the beat of the drum and the repetition of the movements that began to have a trance-like, hypnotic effect. I even got up and danced to one song and felt I had truly honored the ancestors.

This video was not taken in but at the Bon Odori at the in . I think it gives you the feel of the dancing. In LA, they were dancing in concentric circles, which creates an interesting effect. Several of the dancers are very elegant and attentive to what they are doing; others have that dazed look of people just trying to keep up. And from time to time, passers by, oblivious to the camera wander by, making you feel like you are there.

Posted by Waverly Fitzgerald at 2:05 AM 2 comments:
Email ThisBlogThis!Share to TwitterShare to FacebookShare to Pinterest
Labels: Bon Odori, dance, Obon 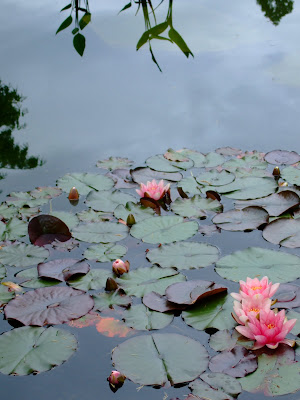 Thinking about the fact that this new moon, the sixth new moon of the year in the Chinese calendar, is known as the Lotus Moon.

I took this photo of the water lilies in the wading pool at Volunteer Park after enjoying Fleeting Pleasures, the exhibit of woodblock prints at the Seattle Asian Art Museum. I think the beautiful design aesthetics of those prints influenced the composition.

During the lotus moon, I always spend at least a day on the water in a kayak or rowboat visiting the water lilies that thrive on Lake Washington. For more on water lilies and lotuses, read the article I wrote on the flower of July.
Posted by Waverly Fitzgerald at 12:25 AM 1 comment:
Email ThisBlogThis!Share to TwitterShare to FacebookShare to Pinterest
Labels: lotus, lotus moon, water lily

Fourth of July as Midsummer 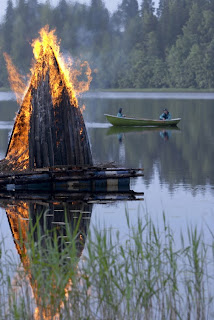 I like to think of Fourth of July as a secular version of pagan Midsummer festivals.

Like many historical holidays, Fourth of July seems to have co-opted many of the symbols of the earlier celebrations at this time of year. For centuries at Summer Solstice, people stayed up all night, dancing around bonfires and rolling burning wheels down the hillsides, to honor the sun. On Fourth of July, we set off pinwheels in the street (evoking the circle, the symbol of the sun), wave sparklers around in the darkness (they look like the sparks that fly up from a bonfire) and gaze at fireworks blazing overhead late into the night.

Many families spend the daytime hours on Fourth of July, at parks and lakes, enjoying a picnic lunch and eagerly waiting for the sun to set on the longest day of the year. We worship the sun and may pay for our devotion with sunburns.

Both Midsummer and Fourth of July are associated with heavy drinking. In fact, Fourth of July is one of the deadliest days of the year in due to alcohol-related traffic accidents. The traditional Fourth of July BBQ combines many of these elements: drinking and fire and spending hours outdoors with friends and family.

Midsummer was always a time of revelry and romance. A Swedish proverb says “Midsummer’s night is not long but it sets many cradles rocking.” The Fourth of July places a little more emphasis on family than on coupling, but there’s no denying the romance involved in lying in your lover’s arms in a grassy park while watching fireworks burst overhead.

Of course, there are many differences between Fourth of July and Midsummer. Midsummer festivals also celebrate flowers and herbs, and often include the element of water (which we do acknowledge here in by setting our fireworks off over ). Still, when I’m annoyed by the drunken crowds or frightened by the sound of firecrackers exploding, I remind myself that this is just the traditional way to celebrate the height of Summer and the glory of the Sun.