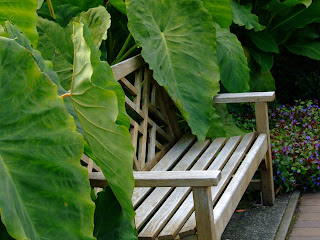 You know how much I love Lent. I love how it resonates with the energy of spring, with its encouragement to shed bad habits, to make room for new growth, to channel the power of change.

This year I thought I was going to give up TV (which is what I gave up last year, though I returned to it fairly quickly afterwards). But then I signed up for Christine Valters Paintner's Lent class at Abbey of the Arts, and realized that instead of giving something up (as I was schooled to do during my Catholic childhood), I was going to acquire a new habit: a daily spiritual practice.

Christine's class focuses on the Benedictine practice of lectio divina,, that is, reading a sacred text each day and allowing it to resonate within (listening with "the ear of the heart," as Benedict wrote). While reading about this concept in Christine's book, Lectio Divina, I realized how seldom I really listen (which is probably why my experience of listening to the plants was so profound). I'm usually preparing an answer or adrift in a sea of my own thoughts. And I thought about how deeply the people around me, particularly my daughter, want to be heard. She's always talking, but probably because no one's listening. I think she would be shocked, and possibly a little terrified, if she realized I was really listening.

Listening doesn't mean responding, so I have to curb my desire to be useful and to give advice. If my desire is to fully hear, to seek to understand, to allow my heart to be touched, that's enough.

So I'm listening for Lent. What are you doing for Lent?
Posted by Waverly Fitzgerald at 1:41 AM 3 comments:
Email ThisBlogThis!Share to TwitterShare to FacebookShare to Pinterest
Labels: phenology, spring 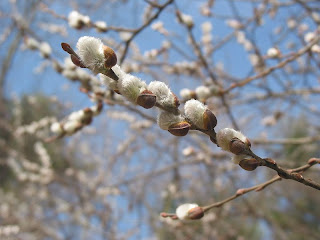 It was a goat willow tree that launched My Year in Flower project back in 2008 when it dropped a spent blossom on my head as I walked past with the dog. At first I thought it was a caterpillar and recoiled in disgust. The sidewalk at my feet was littered with hundreds of little squishy yellow items. And when I looked up, I discovered they came from a spindly tree with bare branches growing close to the sidewalk. And on the lower branches of the tree, I recognized the white fuzzy buds of pussy willows.

Pussy willows had always seemed mythical to me. They didn’t grow wild in Southern California. We only saw them when we went to the Farmers Market in downtown Los Angeles which we only did when relatives came to visit. The pussy willow branches came wrapped in plastic. When brought home and put in vases, they remained frozen in their fuzzy bud stage.

But on this tree, I saw all the stages in their development. First, tender milk-white buds. Bristling green catkins came next, which were gradually frosted with yellow pollen before dropping from the tree to litter the sidewalk in soggy clumps like so many used condoms. And, as I thought about it, I realized this tree was in a constant wave of orgasm as each little flower puffed out its pollen and then collapsed, spent.

It amazed me that I had walked past this tree for years (I’ve lived in my neighborhood for 14 years) and never noticed this miraculous transformation. (To give me credit, this whole cycle is over in one month; for the rest of the year, the tree is rather boring:either bare branches or green leaves.)

The goat willow tree surprised me again this year when I realized there is another stage in its development. Before the milky white buds appear, the ones we think of as pussy willows, they have to push through the brown caps that have protected them through the winter. Right now the sidewalk is covered with those light brown husks, like so many tiny insect shells.

It is only necessary to behold the least fact or phenomenon, however familiar, from a point a hair's breadth aside from our habitual path or routine, to be overcome, enchanted by its beauty and significance.... To perceive freshly, with fresh senses is to be inspired. Thoreau.

This entry was also cross-posted at my other blog at Living in Season. 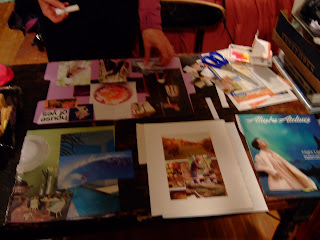 My New Year's practice is to make a collage that represents the experiences I hope to enjoy in the new year. For the past few years, I've been making Soul Collage (R) cards to embody the themes I've chosen for the year. Here you can see my three themes for 2010 as works in progress: Refreshment, Sustainability and Sovereignity.

On the other side of the table you get an upside-down view of the collage my friend Janis made. We love this ritual which we have been sharing for years. We light candles, make wishes, drink tea, nibble on cookies and play with images.

My cards right now are up on the wall in the entry way of my home where they will remind me every time I enter of my themes for the year.

This post is cross-posted at my new blog at Living in Season.