In Time for my Birthday 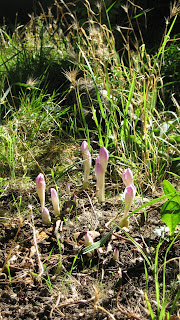 Last year, I wrote about how the amaryllis belladoonna is the flower my mother associates with my upcoming birthday (September 4) because it blooms around that date in Southern California where I was born (Burbank, to be exact). And about how the autumn crocus blooms on my birthday here in Seattle.

And here it is, a week before my birthday. I love how ghostly the flowers look as they emerge from the ground, almost more like mushrooms than flowers in their fleshiness which is probably why they are also known as naked ladies, just like the amaryllis belladonna.
Posted by Waverly Fitzgerald at 11:58 PM 2 comments:
Email ThisBlogThis!Share to TwitterShare to FacebookShare to Pinterest
Labels: amaryllis belladonna, naked lady, september 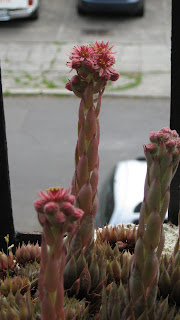 A few months ago I was walking down Twelfth Street past the thrift store operated by an AIDs charity and noticed that the stone roses clustered on the rock wall were sprouting long, phallic protuberances. They seemed odd, emerging so emphatically from the center of those rose-like petals and even more strange when a few days later the top of the fleshy stalk burst forth in red flowers. It gave me a whole new perspective on male orgasm.

But of course, all flowers are in the business of procreation. Just this week, the plants on my balcony went through this same stirring process. I inherited these plants from a gardener at my p-patch who kept them in a stone vase. Very appropriate for their taste (they like to grow on stone) and texture.
The actual botanical name of the plant is sempervivum tectorum. I call them stone roses. Most people call them hens and chicks, a name which baffles me for they don’t at all resemble hens and chicks. Paghat, my authority on many gardening questions, says it is because the central rosette is surrounded by many small rosettes like a hen and her checks (another common name is Cat and Kittens). Other names for these plants include houseleek (they were grown on (slate?) roofs), Thor’s Eye and Jove’s Beard (especially when they are in their phallic mode). According to Paghat, they were called “Welcome Husband” in Dorset where they were grown near the front door so they would be the first thing the husband saw upon coming home from the fields, thus rejuvenating his own member with their exuberant uplift.
http://www.paghat.com/sempervivumalpha.htmlmpervivumalpha.html
They are also said to provide protection from lightning when planted on the roof. That might be because they are under the patronage of the lightning and thunder God, because their leaves (like those of most succulents contain a lot of water, thus preventing a fire) or because the lightning would surely strike the upraised stalk rather than the roof itself. 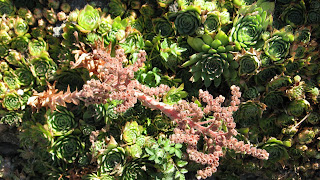 s had moved on to a new phase: the stalks and flowers had dried, after an enthusiastic proliferation. Apparently, after the bloom, the central rosette is often exhausted and dies back, but if it has produced many chicks, they will live on.
Posted by Waverly Fitzgerald at 5:04 PM 3 comments:
Email ThisBlogThis!Share to TwitterShare to FacebookShare to Pinterest
Labels: sempervivum, stone roses

Dogs Made out of Flowers 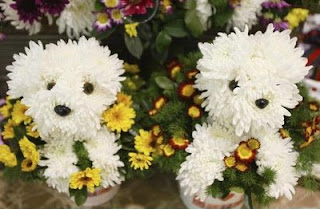 If you type “flower art” into a search engine, these are the pictures you get (if you don’t count pictures and cards made with dried flowers pasted on paper, which I don’t).

I think they’re pretty cute (the white ones bear a certain resemblance to my daughter's chihuahua) but I haven’t been able to find out where these came from or how to create them (are those pompom mums or dahlias?). Somehow I suspect they’re from Japan. If you have a clue, let me know 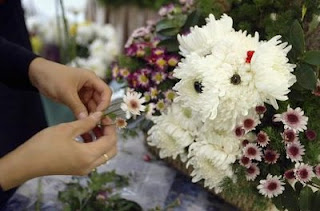 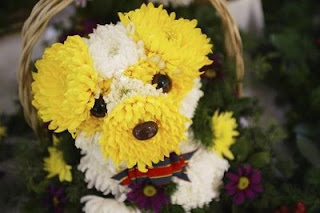 Posted by Waverly Fitzgerald at 4:28 PM No comments:
Email ThisBlogThis!Share to TwitterShare to FacebookShare to Pinterest
Labels: flower art 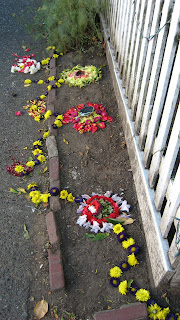 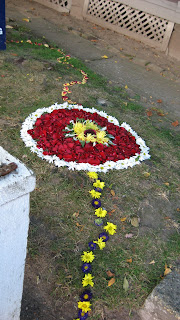 Last Sunday, I spotted the most amazing work of art on my way to my local coffee shop. Someone had created elaborate designs with flowers on the sidewalk outside Horizon Books, the used bookstore in my neighborhood. There were several central medallions, joined by a trail of petals, and a garland on the sidewalk around the bicycle rack.

I was curious about the purpose of the art. A friend suggested it might have something to do with the rumored closure of the bookstore (and if so could flowers ward off such a fate?) but the bookstore isn't closing. A woman apparently thought it was a memorial to the store's cat and rushed inside, only to discover the cat is very much alive. I asked Nick, who works at the bookstore, and he says it was a performance art project. Which reminded me of a homework assignment I once gave the students in an 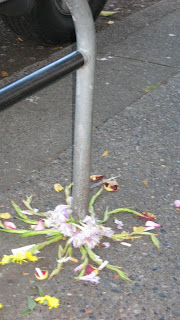 Artists Way class I was teaching.

Inspired by the art of Andy Goldsworthy, I asked the students to create a transitory work of art in nature. For all of us, it opened up new ways of thinking about art: as mystery (what is it? What does it mean?), as temporary (How long will it last?), as collaborative (created with free materials, provided by the earth). It was also for many of the students, the first time they had ever displayed their work to an unknown audience. One woman who constructed a sculpture of tree branches in a public park had an audience as she worked. Others imagined people coming upon their work and wondering about it.

I loved the piece I created. I used a piece of chalk to outline the shadow cast by a young tree on the sidewalk. As the sun shifted overhead, the shadow changed and I enjoyed watching the way the actual shadow overlaid the chalk traces of the former shadow. I also eagerly waited for the next day to see if the shadow would fill in the same chalk outlines, which lasted a surprisingly long time (several days) before they disappeared.

The flower art outside the bookstore also evoked the fabulous flower carpets created as part of Corpus Christi processions, primarily in Italy and Spain. An incredible amount of effort, design and labor goes into creating these gorgeous carpets, which are then walked upon by the procession carrying the sacred Host (the Body of Christ), so that all that is left behind is a blurry vision of what once was. And yet I find this design as beautiful as the original, and perhaps more evocative of the nature of flowers, processions and life.

Posted by Waverly Fitzgerald at 11:35 PM No comments:
Email ThisBlogThis!Share to TwitterShare to FacebookShare to Pinterest
Labels: flower art

I was tagged by Lunaea and asked to share eight random things about me. Here they are. 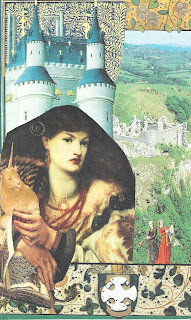 1. My ancestress was a Welsh princess (or rather she was the daughter of the last king of South Wales, Rhys ap Tudor, but princess sounds so much better). Her name was Nesta and she married Gerald, a baron who was in charge of the castle the Normans had planted on her ancestral estate, Pembroke Their children were called the Fitzgeralds and later invaded Ireland but that’s another story. Nesta was sometimes called the "Helen of Wales." She was kidnapped by her cousin who was in love with her; she was also the mistress of Henry I who fought to get her back. I spent over 10 years researching Welsh history and made three trips to Wales because I wanted to write a historical novel based on her life and then found out someone else had already done so. The picture on the left represents my rather romantic picture of her and was created when I was participating in the Ancestor Deck.

2. The summer after I graduated from high school was the first summer the Hollywood Bowl hired female ushers. My sister and I were among the handful of girls working with about one hundred guys. Summer nights. Under the stars. Classical music playing. And lots of cute boys. It was a heavenly job, although I never enjoyed classical music (and still don't). My favorite concert featured the Jackson Five in 1970. Our supervisors were worried about crowd control and hired extra security but it was the best behaved audiencecrowd we ever had at the Bowl that summer and the show was fantastic. Michael was 12.

3. My most famous college professor was Angela Davis. I signed up for her class in Existentialism at UCLA during spring quarter 1970. The student strike began after the second class and so we never saw her again (we didn’t go to class and neither did she). I got an A in that class.

4. The worst grades I ever got in my life: a C in Handwriting in third grade. And a C in Balkan Dance at UCLA. I'm still miffed about both of them. Although the C in Handwriting was well deserved. I can't read my own writing.

5. I wrote my first novel when I was thirteen. It featured my best friend, my cousin, and me as orphans who escaped from a cruel orphanage. My second novel written the following year was called Pioneer Polly: it was a historical novel which focused on the life of a young girl with her parents and siblings in a mining town in the Sierra Nevada at the turn of the century. I sold my third novel, a Victorian historical romance called St. John’s Wood, as part of a three-book contract to Doubleday when I was 25. It was followed by Mayfair, Chelsea and Grover Square (published by Jove) under the name Nancy Fitzgerald. I now write female PI novels (three so far) but none have been published.

6. I’ve worked for two museums. I was a Membership Clerk for the Los Angeles County Art Museum and. And an Accounts Payable clerk for the Seattle Art Museum. Neither one of the jobs was very exciting (although my co-workers were great) but I loved wandering through the galleries when the museum was closed.

7. I’ve been a member of two collectives: The Brideswell Collective publishing the women’s spirituality The Beltane Papers in the early 1990s and the Red and Black Collective, running a feminist bookstore, Red & Black Books in Seattle, in the late 1990s. I've also lived in a collective house. Between 1985 and 1987, I lived at Prag House, along with 11 adults and five kids. Prag House just celebrated its 35th anniversary.

8. My not-so-secret ambitions include: taking a perfume class, writing a book about the origins of early Italian martyrs, living in a cottage in Wales, and creating collages that use pictures from travel magazines and brochuresto create new imaginary landscapes.

And now I tag Cate.
Posted by Waverly Fitzgerald at 3:50 PM 6 comments:
Email ThisBlogThis!Share to TwitterShare to FacebookShare to Pinterest 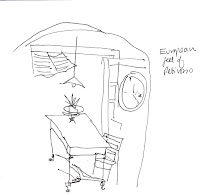 Because I'm most likely to be sitting with a pen in my hand in front of a blank page while at a coffee shop, my notebook is full of sketches that evoke my favorite coffee shops.

The sketch at the left, while not accurate (the table and chair are painfully out of proportion to the clock) still captures a bit of the European flavor of Pettirosso, which makes the world's best veggie BLT sandwiches.

Here's a cup of coffee and a lamp from Victrola, my home away from home: 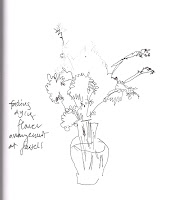 And finally a bouquet of fading flowers at Cafe Argento, just around the corner from where I work.
This one started out as a spirit drawing but I looked at my page as I was sketching the stems in the vase. My pen gave out at the top of the floral arrangement but I thought that simply amplified the theme of fading so I didn't retrace the lines.
I like having these little reminders of my days tucked inside the pages of my notebook.