Spiders of the Season 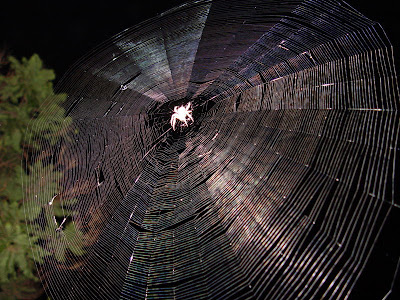 I've seen many spiderwebs in the last few weeks. At first, I thought I was just noticing them more, perhaps because of a trick of the autumn light. But when I went to my garden, there were webs all over my bay tree. One spider had a striped grub all wrapped up in the middle of the web. I tried to trim the tree without disturbing the spider's web but I accidentally tore one of the threads and watched the spider scuttle to safety on the topmost twig of the tree. I think it was an orb weaver: a big, round golden spider. It looked very healthy.

A little bit of web research (none of it definitive) suggests that many spiders only live for a year. The orb weavers I am seeing are probably females who are waiting for males to find them so they can mate and lay eggs. The males will die shortly after mating while the females will survive until the first frost. Other spiders, like hobo spiders, hibernate in the winter. Does anyone know more about the seasonal cycle of spiders?

It took me a while to recognize that I had just posted a message to subscribers to my weekly Calendar Companion suggesting they look for an animal ally. So I wondered if I was noticing the spiders because they had a message for me. In Medicine Cards, Jamie Sams and David Carson say that Spider's message is to create, create, create. That makes sense as I'm currently working on revising a novel, revising one flower essay and creating another one. So I'm definitely in the throes of creative chaos.

Sams and Carson also say the appearance of a spider might remind you to look at what you've caught in your web. That makes sense to me as I just learned I was awarded an Artist Trust grant to write the final essay for my book of essays on flowers.

I got this great photo from Wikipedia. I haven't been able to achieve a good spiderweb photo yet myself.

I asked the students in my current Slow Time class to take a version of the Myers-Briggs Type Indicator (MBTI), a test which categorizes people based on certain personality traits, because I was curious about how these traits might affect a person’s relationship with time. (As far as I know the MBTI must be administered by someone who is certified in the method; the test I suggested to my students is a free variation which I found at this web site).

I’ve always enjoyed personality tests and have used my understanding of the MBTI for many years, primarily as a way to understand differences between my approach (I’m an INFJ) and that of those around me. Wikipedia has a lengthy article on the MBTI which describes its development and provides charts showing the percentages of types in the general population and the labels associated with the various types.

There are two traits that I’m pretty sure affect tempo, if not approach to time. One is the measure of introversion/extraversion. I’ve been reading a lot about Introverts recently (including Networking for People who Hate Networking by Devora Zack) and the article “Revenge of the Introverts” by Laurie Helgoe in Psychology Today (Sept/Oct 2010)). Introverts need more alone time than extroverts. Zack also encourages introverts to pace themselves, allowing for plenty of quiet time after intensely social activities. (I’ve found that my introversion has increased as I grow older. I used to be able to sustain the extended extroversion of a writers’ conference for a whole weekend. Now I’m a TV-watching-vegetable after one full day.) So introverts would want to plan for solitary time in their schedules.

But those two words—plan and schedule—are problematic for the P’s among us. This is another trait that is expressed in the Myers-Briggs test as P (perceptive) or J (judgmental). The labels are unfortunate as they are often misunderstood. P’s are impulsive and spontaneous, they like things open-ended. I always use the example of cupboard doors. P’s leave them open; J’s close them. J’s love making schedules; they probably love routine as well (I do). But P’s don’t like having things locked down; a full schedule makes them feel hemmed in. They want to be able to choose an activity based on how they feel at the moment.

J’s love calendars and deadlines, schedules and plans. That’s how they get things done. But P’s want to accomplish things as well. I always recommend they use a more intuitive approach to goal-setting, like mind-mapping. You would put the desired goal in the center of a page, then branch out from it, writing in tasks, outcomes and qualities. A P could then feel free (I imagine) to tackle any of the steps in any order.

The other two traits identified in the Myers-Briggs type come from Jung’s four personality types. He believed people had a preference for either Thinking or Feeling (that is acting from logic or acting from the heart) and a preference for either Sensing (practical, hands-on experience) or Intuiting (a more mental, future-oriented approach to the world). I’m not as sure how these traits might affect your relationship with time.

I found one discussion at a website which discusses how the various types deal with time at work. It suggests that Sensing types will be more rigid about sticking to a time schedule. I’m not so sure about that. That assumes that time is actually measurable and quantifiable. I would think a Sensing type would be just as likely to eat when hungry (they would sense that it’s meal time) as to eat when the clock says noon. This web site also believes that Thinking types will plan their day rationally while Feeling types would plan their day according to the personal encounters they want to have. Again, I think that’s probably simplistic. Perhaps it would be more accurate to say a Thinking type might be more motivated to achieve certain outcomes while a Feeling type would be trying to cultivate a certain quality of experience while moving through time.

What do you think? Can you make any correlations between your MBTI type and your relationship to time?