I focus on different plants at different times of the year. Through most of the spring and summer, I'm looking for flowers. Around August, at the time of the Assumption, I begin noticing the grasses which are in flower. And beginning in Lammas, it's the berries. I thought I would feature some of the local berries over the next few days. 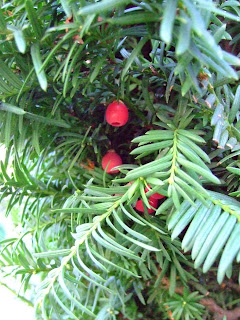 Yew berries. They're not actually berries but arils. I first learned about them a few years ago when I noticed a flock of bird twittering in a yew hedge. They stripped the tree within an hour, gorging on the berries.

I just finished taking a class with master teacher Priscilla Long. I was working on an essay on foraging and one of my fellow writers was writing about a patch of dirt in her yard that is next to a yew tree. She mentioned the "poisonous looking" berries on the tree. I told her they were not--I think it's just the fluorescent pink and the gelatinous texture that makes people think they're poisonous.

Then I got a couple of books on edible plants from the library and learned the seeds (there are hard brown seeds inside those bright pink fruits) are quite poisonous. I was so relieved to see Chris in class the next week and hastened to let her know she should not eat the berries. Apparently birds can eat them because they don't digest the seeds but simply poop them out, thus helping the yew to reproduce.

The yew's reputation for toxicity is well-deserved. Both bark and leaves are poisonous.
Posted by Waverly Fitzgerald at 1:03 AM 4 comments:
Email ThisBlogThis!Share to TwitterShare to FacebookShare to Pinterest
Labels: berry, november, yew
Newer Posts Older Posts Home
Subscribe to: Posts (Atom)