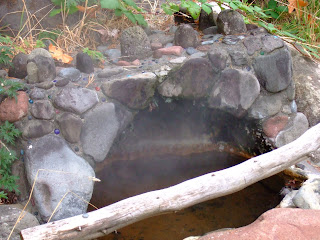 After two weeks of reflection, I don’t think the huge headache I developed after the Herbal Conference at Breitenbush was due solely to caffeine withdrawal (maybe I’m in denial here). It might have been part of a healing process sparked by some of the workshops I attended. I’ve come up with this theory because I started dreaming again, within days of returning from the conference, and I haven’t had a really remarkable dream for years.

These dreams have been both vivid and significant. In one, my father (who died over 25 years ago) was being healed. He was lying on a beach and healer was painting his face with reddish pigment. A huge green wave came and washed over his body as I watched. In another dream, I was with my family and we were trying to escape a tidal wave by jumping into and floating around in the large lake in back of our house. The water was warm and green in color.

Both of these dreams emphasized water. Breitenbush is famous for its healing hot springs. And at the conference, I attended a workshop on Spiritual Bathing led by Rosita Arvigo who was trained by a Mayan shaman in Belize. She spoke about some of the conditions that require healing in that culture, conditions we might consider emotionally based, like fright or envy or grief. Then she created a florecida (a floral water) by placing herbs and flowers in a bowl of water and squeezing them with her fingers, while reciting this prayer she learned from Don Elijio Panti, a Mayan shaman with whom she studied:

In the name of the Father, the Son and the Holy Spirit, I give thanks to the spirit of this plant and I have faith with all my heart that you will help me to make a healing, purifying bath for [person].

She also called on the Blessed Virgin Mary and Ix Chel, the Mayan goddess of the moon, water and healing, and she told us we could use any deity we wanted, though it was important to recognize the power to heal came through this connection with the divine. We could use any flowers or herbs we liked in creating a bath for ourselves, but we should choose a significant number, for instance, 9 sprigs of each plant, and non-toxic plants or flowers, especially those that evoke certain qualities. She worked the plants with her fingers until they had discharged their qualities into the water—it should be a greenish color, and, since she used some mallow family flowers, it was also slimy.

Normally she would let this sit out in the sun for several hours but since we were doing a one-hour workshop, she walked around the room and asperged us, that is, sprinkled us with this special floral water, using a branch of cedar. I definitely felt the clearing energy of the water as she sprinkled it around my head, and I noticed the atmosphere of the room change as well, as she went around, asperging everyone.

But I don’t think I realized how profoundly this affected me until I began dreaming in the days that followed. After reading through Spiritual Bathing, the book of water rituals compiled by Rosita Arvigo and Nadine Epstein, I noticed that green water was mentioned in descriptions of certain rituals, including the preparation of agua de florida, used in Ayauasca ceremonies. Rosita also mentions the green color of the florecidas prepared by Julia Riveras during a workshop on the Amazon.

If you are looking for an overview of spiritual bathing traditions from all over the world, Spiritual Bathing is a good place to start. The book is beautiful, full of wonderful photographs but the coverage is a bit shallow. We get only the most general discussion, a page or two for each culture from Rome to India, Russia to Turkey, Japan to Peru. And the suggested rituals, though intriguing (I will try several of them), don’t seem traditional but rather adapted for modern American readers. I think this probably the nature of any glossy coffee-table book. One of the aspects of the book I enjoyed most were personal accounts of spiritual bath experiences from the two authors.

But if you want a really engaging, personal account of baths all over the world, I recommend Alexia Brue’s travel memoir: Cathedrals of the Flesh: My Search for the Perfect Bath, which details her trips around the world, searching for the perfect bath. However, she is more interested in the culture of the bath than the spiritual aspects of it.
Posted by Waverly Fitzgerald at 5:09 PM No comments:
Email ThisBlogThis!Share to TwitterShare to FacebookShare to Pinterest
Labels: dreams, healing, hot spring, water
Newer Posts Older Posts Home
Subscribe to: Posts (Atom)