In my last newsletter, I wrote about showing up late for a BBQ with the excuse that I was late because I was working in my garden, and later realizing that I was living in "plant time," an entirely different kind of time than clock time.

Well, this weekend, the same friend invited me to yet another BBQ (his apartment building is famous for their long, hospitable BBQs) and this time, when he left the message he said: "It starts at 3 PM people time, not Waverly time." And that got me started thinking about a whole new kind of time: Waverly time.

I didn't make it to the BBQ but that's because I was living in Waverly time. In Waverly time, you are never rushed and you do things when you feel like doing them. That's all I know so far about Waverly time. But I find the whole concept delightful.
Posted by Waverly Fitzgerald at 11:18 PM 1 comment:
Email ThisBlogThis!Share to TwitterShare to FacebookShare to Pinterest
Labels: slow time 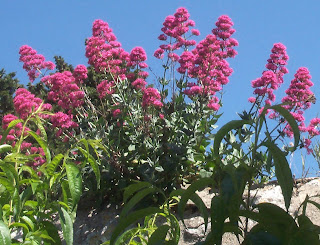 This plant (centhrantus rubra) blooms all over my neighborhood and I like its common name: Jupiter's Beard. I hoped there was some mythological association between the plant and Jupiter, but after checking extensive Googling and checking my primary source for mythology of plants on the web, Paghat, I couldn't find any. I suspect the name comes from the belief that Jupiter's beard was red.

I haven't paid much attention to it because it doesn't do much, except spring up exuberantly as early as April and continue blooming far into November. The bees love it but it's not edible, medicinal or fragrant.

Or so I thought until last month when I was walking by a large patch in bloom and I smelled a most heavenly odor. Knowing that I sometimes assume flowers don't have fragrance when they do (I was totally shocked by my first fragrant rhododendron), I bent down and inhaled. Quite a nice fragrance--it reminded me a bit of grape jelly.

But on a later walk, when I decided to validate my findings, I couldn't discern any scent at all. I wondered if this was one of those flowers that is fragrant only before it's pollinated and then loses its scent.

And during a quick search of the web today, before posting this entry, I found various descriptions of its smell, all contradictory. There are many entries which claim its fragrant, without describing the fragrance. One post said it smelled like vanilla. Another just said it smelled "divine." That was it for the positive associations.

Plants for the Future has a reference to it as smelling like perspiration. One gardener at Dave's garden complained that the cut flowers smelled like "cat pee." Web sites describing the flowers blooming wild in England said the smell was "doggy," as in "stale dog dung" or "catty."

I know that true valerian (the one that does have herbal properties) has such an unpleasant odor that early herbalists, Discorides and Galen, named it Phu. At least that's what Mrs. Grieves reports in her herbal. And the two valerians are in the same family.

What's going on? What does red valerian really smell like? I'm going out to smell some right now. If you have some in your neighborhood, please check it out and let me know what you think? 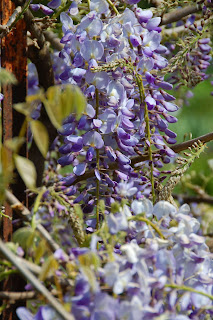 When I first decided to tackle the topic of flowers, I actually thought of flowers as a separate species, as in there are trees, plants and flowers.
It took a while before I realized that flowers are simply a stage in the life cycle of every plant, at least, all of the angiosperms. Trees have flowers. Right now in Seattle, the lindens are about to burst into bloom. The horse chestnuts are sporting the delightful red and white blossoms known as candles. And the laburnums have shed their petals, as have the locusts. Grasses also have flowers, although we rarely see them because they’re so small and fine. The fuzzy pussy willow buds that I wrote about in March are flowers, as are the catkins dangling from the birches and the alders.
All flowers exist to flirt, to lure the pollinators that will fertilize the ovules and swell into fruit and disperse the seed. And all flowers are transitory, existing only for a brief interval in the life of the plant. Lucky for me there is a far wider time range for blossoming than I imagined when I started my flower project. Now I know that I can find blossoms year round, like the curving yellow threads of the witch hazel in January.
The photo of a wisteria blossom was taken by my friend Michael McIntosh at Schreiner's Iris Farm in May 2008.
Posted by Waverly Fitzgerald at 1:05 AM 1 comment:
Email ThisBlogThis!Share to TwitterShare to FacebookShare to Pinterest
Labels: flowers 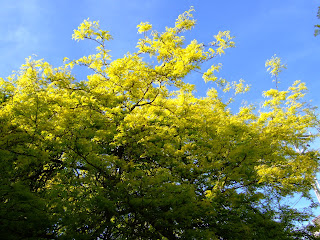 All last week I kept trying to capture on film the effect of sunlight seen through the new green leaves of summer. Then I heard this Basho poem and realized he had captured this perfectly in words:

Speechless before
These budding green spring leaves
In blazing sunlight
Basho, A Voyage to the Interior
Translated by Sam Hamill
Posted by Waverly Fitzgerald at 1:49 AM No comments:
Email ThisBlogThis!Share to TwitterShare to FacebookShare to Pinterest
Labels: Basho, summer
Newer Posts Older Posts Home
Subscribe to: Posts (Atom)