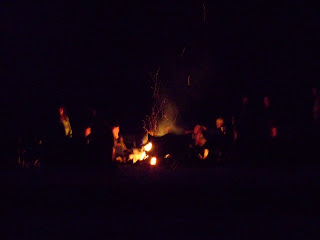 It's amazing how fast something becomes a holiday tradition., i.e., the Lammas Festival. I attended last year and returned this year, eager to experience some of the magical moments from last year, like swimming in the river, and singing the song "They Shall Remain" in the closing circle, and breakfast at the Acme Cafe on the way home.

But the beauty of repeating an experience is that it isn't quite the same the second time. And although all of those things happened again, I left with a whole new set of magical memories. Like singing around the campfire and sleeping in my car and waking up every few hours to see the shifting tableaux of the campground, like a series of camera frames.

When I first curled up in my front seat, I could look out my window and see the picture above, of the bonfire and sparks dancing upward into the night sky, like fiery snakes, and the people were only rosy glows moving in and out of the light. A few hours later when I awoke, I saw only a blazing fire throwing off great sparks; all the rest was dark though I know there was a fire tender keeping watch. The next time I woke up, fog had settled in the valley, and the fire was just a dull orange glow although the ascending sparks occasionally lit the mist above the fire with bursts of pale peach-colored light. I woke again a few hours later after daybreak and saw a circle of empty camp chairs around the fire pit. It was all so close, almost within a hand's reach, it seemed, though the bonfire had seemed so far away from my car when I retired. I closed my eyes again and when I next woke up, the chairs were populated. People were drinking coffee and talking. I rolled down my window and let their words drift in, along with the smell of dried grass (I love the smell of dried grass.)

Probably the best memory, though, was my recognition that I had become part of a tribe. Even though I hadn't seen most of these people since last year, I felt so comfortable, so accepted, so welcomed, it was easy to be myself (a shy person and a cranky camper). I have a feeling this gathering, in its own small way, recaptures the way people felt when gathering for the Teltown Fair back in the eleventh century.

A chance to reconnect with old friends, to hear the stories of what's happened in their lives, to sit back and watch the new babies being passed around the circle, to see how the kids have grown, to admire the talents each person brings to the group (clothing, song, art work, learning, embroidery, food art, ritual, etc.), to feast and sing and dance. I'm already looking forward to returning next year, knowing the magical memories will be completely different.
Posted by Waverly Fitzgerald at 11:51 PM 8 comments:
Email ThisBlogThis!Share to TwitterShare to FacebookShare to Pinterest
Labels: festival, Lammas 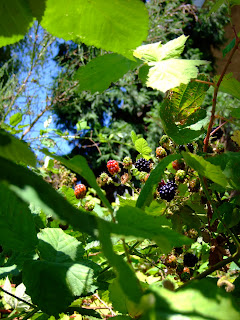 When you're a holiday maven, it's hard to keep up with all the holiday traditions you develop. this year I missed my usual July/Lotus Moon water lily paddle on Lake Washington, but I didn't miss my Lammas blackberry picking, a tradition I developed to simulate in Seattle the Irish custom of climbing high mountains on the Sunday before Lughnasad to pick bilberries.

Usually I go blackberry picking on the Sunday before Lammas with my friend Michael after our usual Sunday breakfast. We go to the blackberry bushes that grow along the Burke Gilman trail, right below the University of Washington and the I-5 bridge. But we didn't go on the Sunday before Lammas because we were both in a hurry to go someplace else and we didn't think the berries would be ripe (it's been overcast in Seattle in recent weeks).

Luckily I got another chance to go berry picking on Friday, August 1st, because my car got a flat tire and I was delayed in heading out of town to a Lammas festival. So I made a solitary pilgrimage to the berry bushes. As you can see from the photo, there were a few ripe ones on these bushes, but I couldn't reach them. But all I had to do was cross the street. On the other side of 40th, I found plenty of warm, sweet, ripe blackberries. I brought home a basket full to share with my daughter.
Posted by Waverly Fitzgerald at 12:40 AM No comments:
Email ThisBlogThis!Share to TwitterShare to FacebookShare to Pinterest
Labels: blackberry, Lammas
Newer Posts Older Posts Home
Subscribe to: Posts (Atom)