Signs of Spring in Seattle 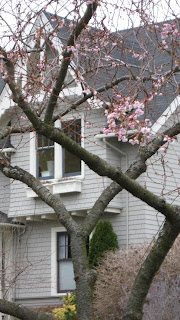 I found this cherry tree blooming in my Capitol Hill neighborhood on December 9th. There are certain cherry trees which always bloom around this time of year in Seattle. I'm not sure why. 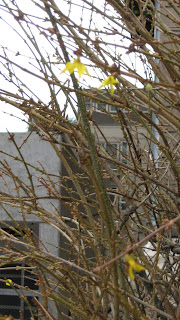 On December 20, the day before Winter Solstice, I found this forsythia in bloom. It was on the east side of a brick building. These plants that are right next to buildings which radiate the heat of the sun often bloom before anything else. Still it was surprising to see this sunny promise of spring so early in the year.
Posted by Waverly Fitzgerald at 2:06 AM 3 comments:
Email ThisBlogThis!Share to TwitterShare to FacebookShare to Pinterest
Labels: cherry tree, forsythia, signs of spring

My Favorite Books Read in 2007

I'm in the middle of the review process I go through every year, closing the door on the old year and dreaming of what I want in the new year. As part of this process, I go through my journals for the past year and make notes of important ideas, accomplishments, interactions, insights, dreams and the books I read. Since I read about 2 books a week, the latter is quite a list In fact, last year I read 142 books according to my list (I know there are some I didn't write down).

Unfortunately there were as many books last year that I stopped reading as that I finished. My list is peppered with comments like Ugh! and Ew! I don't know if this comes with increasing age (and thus increasing discrimination--I don't want to waste my time) or if the quality of published books has really declined. I suspect both are true. Everyone in my writing group had similar complaints about the difficult of finding good books to read last year.

Nancy Pearl, our famous librarian who wrote the book, Book Lust, has an age-related rule for how many pages one should read before deciding whether to finish the book: Take the number 100 and subtract your age. That's how many pages you must read before making your decision. Thus if you are 99, you only have to read 1 page. If 50, 50 pages. If 20, 80 pages. I like this rule. There are just far too many good books to read and not enough time to read them all.

Dark Angels, by Karleen Koen, an old-fashioned and complicated historical novel that really plunges you into the world of restoration under Charles II. As L. P. Hartley wrote: “the Past is a foreign country; they do things differently there.”And it is. In this novel, people don't just dress in costume, they act from a completely different set of beliefs and operate in a different context than we do. The characters are fascinating, especially the feisty, scheming heroine; the details are rich, sensual and historically accurate. I read Koen's Through a Glass Darkly many years ago and loved it, so I went back and reread that as well as her second book. I think this is the best of the three.

ury. It interested me because one of my favorite historical novels of all time, Great Maria by Cecilia Holland, also takes place at this time period and focuses on the in . Whereas Holland's novel focuses on the brigand-like life of the Norman barons in the mountains, this novel is set in the sophisticated and cosmopolitan city of Palermo where the Norman King Roger, rules over a kingdom of Muslims, Christians, Jews, Latins and Greeks. The narrator is a bureaucrat. Despite the fact that he's in charge of providing entertainment for the King, he thinks like a bureaucrat, very observant of details and costs and office politics (some reviewers at Amazon thought he was boring). In the end the office politics bring him down, betrayal comes from unexpected places and he has to free himself from his own prejudices to survive.

Horse Heaven by Jane Smiley is equally complicated. Think of what Dickens would have written if he had tackled the world of horse-racing. The writing is superb. Finely crafted yet translucent. We're introduced to a panoramic cast of characters and the action ranges across the . The point of view shifts marvelously, we even enjoy learning how horses think about life. I have to admit I found it hard to keep everyone straight and yet I thoroughly loved this book. I’m told it’s like Moo which I have not yet read.

Song of the Crow by Layne Maheu

Layne was one of the students in my blogging class. His publishers wanted him to start a blog to promote this book which features a crow’s eye view of the Flood. Even though I’m a huge fan of crows, it sounded like a weird premise, that is, until I started reading it. What a delightful and magical book. I’m hooked on the plot, savoring the delicious language (crows have a very earthy appreciation for life) and thoroughly enjoying the experience of life as a crow. It’s one of those books which I’m forcing myself to read slowly because I don’t want it to end. Those of you who are also crow fans will appreciate the bibliography at the back and the crow epigraphs at the start of each chapter.

I met Jay Griffiths at the first Take Back Your Time Day Conference in in 2005. She was an incantatory presence, reading from her book A Sideways Look at Time. Like a bard of old, she wove a spell of magic and enchantment with her words, exhorting us to open up to the juicy possibilities of time.

I’ve been reading this book slowly ever since I bought a copy when Jay was here in in February to read at Elliott Bay Books. It’s the kind of book, you can savor, dip into here and there, use as an oracle. The structure is based on five elements: earth, ice, water, fire and air, and corresponding landscapes Jay visited: the jungles of the Amazon, the Arctic, the South Seas, the outback of , and the mountains of . In each place, she connects with the indigenous people, the plants, the animals, setting aside Western assumptions and exploring what it is like to live in these wild places. You can read it as a poem. You can read it as philosophy. You can read it as a grand action/adventure story. I don’t think you can read it without being challenged and changed.

Jay was just given an award by Orion magazine for best book of 2007. For an excerpt from Wild go to the Orion site.

Stewart writes in a much more journalistic style. Her language is clear and her story is compelling. I couldn’t put it down even though all I was doing was following Stewart on her world-wide tour, exploring the flower business, from the greenhouses where roses are grown in , to the giant flower market in , and many place in between. Along the way she interviews growers, workers, florists, horticulturalists and explains some new trends in flowers, including the push towards more organic flowers. One thing you learn is that the flower growing business (for the most part) treats flowers like products: they are altered for maximum size and long life, dipped in fungicide, dyed different colors. Stewart also shares some startling statistics: Americans buy most of their flowers in grocery stores. We also spend significantly less per year on flowers than Europeans: about $25.90 average a year compared to $70 in and $100 in . If you’re depressed after reading this book, you might want to read Heirloom Flowers by Tovah Martin which talks about the efforts of gardeners and nursery owners to preserve the incredible variety of local and old flowers.

I’m not alone in loving this book. It tops many best-selling lists. I especially appreciate the casual, conversational tone of the narrator and the way she infuses spirituality into her life.

Gail Campbell grew up in in the Fifties and became estranged from her parents, especially her authoritarian and conservative father, during the tumultuous decades of the Sixties. In sophisticated and supple language, with an instinct for honesty and directness, Gail Campbell writes an extraordinary memoir about this alienation and how she was able to reconcile with both the severe landscape of her childhood and her father. I was amazed that someone who had previously written only book reviews could produce a first book so beautifully crafted. It reads like it was written by a poet.

I originally got this book from the library because it sounded like the author was trying to achieve much the same thing I was trying to do in my blog. I totally fell in love with it and have now ordered a copy of my own. This is not only a well written book but a well published book. It feels good to hold and it’s beautiful to look at.

Taking the Chinese almanac with its division of the year into 72 five-day segments, each with a poetic title, like East Wind Melts Ice or Rice Ripens, as her structure, Liza Dalby writes lovely poetic essays on the changes the seasons bring in Japan, China and her garden in Berkeley, California. An anthropologist by training, Dalby has a deep knowledge of Japanese culture as a result of studying in for years (she has also written about kimonos and her training as a geisha as well as a novel based n the life of Lady Murasaki). Her essays are rich with haikus, folklore, etymological snippets, small personal disclosures, plant recommendations, even recipes. Where else would you learn about the colors of the robes worn by noble women of the eleventh century (Pink Maples wore a top kimono of bright pink, over robes of gold, pale yellow, aquamarine, rose and pale pink). Or that the original Japanese word for the color orange: daidai-iro (daidai color), comes from a citrus fruit like a Seville orange (now the English loanword orenji is more common). 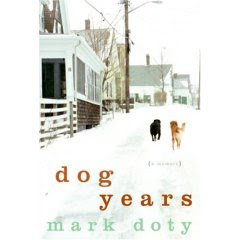 I read this during the Midwinter holidays and it was magical read. The language is gorgeous as might be expected from Mark Doty, a marvelous poet. He writes intelligently, even philosophically about a sentimental subject—the love of dogs—and yet never slides into sentiment or cliché. I didn’t cry while reading about the deaths of his two dogs (though they died in ways surprisingly similar to my dog Chester) but I feel like crying now every time I see the dogs (Mark’s dogs) on the cover of the book, because I have come to love them as well and know what their loss means. Yet overall this is not a sad book, but an uplifting one.

What I noticed after compiling this list is that it seems 2007 was the year of books about animals. Dog Years. Crow Stories. Horse Heaven. I also read a wonderful YA novel called Strays by Ron Koertge about a young boy in foster care who spends most of his time talking to animals and The Tao of Equus by Linda Kohanov, an amazing book about new ways of working with horses, including using them to assist in the therapy and healing of traumatized kids and abused women. Kohanov manages to weave all of this together with dreamwork and shamanism and feminist history.

I have another whole list of books I read and loved this year about plants. If I find the time in the next few days, I might post that.
Posted by Waverly Fitzgerald at 1:36 AM 3 comments:
Email ThisBlogThis!Share to TwitterShare to FacebookShare to Pinterest
Labels: animals, books
Newer Posts Older Posts Home
Subscribe to: Posts (Atom)