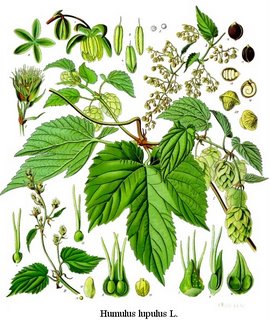 The plant of the day for Fructidor 23 (Sep 9) was hop. But I chose to feature the chrysanthemum instead in honor of the Chinese Double Nine holiday on which the chrysanthemum is the featured flower. Still I didn’t want to skip hop, such an important plant for centuries. Besides it’s beautiful.

I’ve always hated beer but my attitude has shifted and I think it’s due to my Plant of the Day project. A few weeks ago my friend, Kim, was sipping a microbrew at a tavern and I caught a whiff of his beer. It smelled great and when I commented on it, he gave me a taste. It tasted great too. I could taste the herbs in it, which I’ve never tasted before in a beer. I woke up to the recognition that beer is simply another way to ingest plants, and one that really features aromatic herbs, like hop. (As far as I can tell, the plant is hop while the female flowers are hops.)

Did you know that hop is in the same family (the Cannabaceae) as Marijuana? This may be the reasons marijuana smokers were called “hopheads” but smoking hop does not produce intoxication. Humulus lupulus is the European variety and the one grown commercially. There is also a native American hop known as Humulus americanus which is found in wet canyons and streams from Nevada, Utah and Arizona eastwards.

Hop is a fibrous vine, similar to the native wild grape. It is grown commercially on 25-foot poles in hopyards. A network of wires is strung from pole to pole and more wires dangled to the ground. In early spring, the vines are trained up these wires, growing in clockwise spirals, sometimes as much as 6 to 12 inches in a single day. The biggest commercial growing regions are Bavaria, Germany and the Pacific Northwest, but up until the early twentieth century, Mrs.Grieve reports that 70% of the hop grown in England was grown at home.

Male and female flowers grow on separate plants but it’s the female flowers, which look like leafy, cone-like catkins, which are harvested in fall, usually in the third year after the plant is planted. They should be a light yellowish green color, have a full pleasant aroma and be slightly sticky. They should be dried in a cool oven immediately after harvest. Hops lose much of their flavor and medicinal value when stored so use them promptly, by making a tincture or adding it to beer. Michael Moore also uses the last whole yard of summer branches, dried and powdered to make a salve or dust on the skin as an antimicrobial.

Hop is a beautiful plant and some varieties are grown just for decoration, like the Japanese variety, Humulus japonicus variegatus and a yellow leafed variety, Humulus lupulus aureus. The dried flower heads are also attractive. Rodales recommends adding them to wreaths and other dried arrangements.

Beer and Hop
Beer, of course, is made from fermented grains, like barley. But brewers have always added herbs to flavor beers, including marjoram, yarrow and wormwood. Around the 9th century, the Germans began adding hops because they liked the bitter flavor and it helped preserve the beer.

By the 14th century, most European beers contained hop. The English drank ale until 1500 when brewers, began adding hops, changing the sweet ale into bitter beer. Ale lovers complained and Henry VIII banned its use, but his son, Edward VI, rescinded the ban in 1552.

According to the Wikipedia article,
http://en.wikipedia.org/wiki/Hop_(plant)
the point at which hops are added to the beer influences the flavor and bitterness of the beer. The later in the process the less bitterness and the more hoppy aroma.

Mrs. Grieve in her Modern Herbal (1931) provides various recipes for herbal beers:
http://www.botanical.com/botanical/mgmh/h/hops--32.html
including this one for Hop Beer:
To make a good HOP BEER, put 2 OZ. Hops in 2 quarts of water for 15 minutes. Then strain and dissolve 1 lb. of sugar in the liquor. To this add 4 quarts of cold water and 2 tablespoonsful of fresh barm [active yeast]. Allow to stand for 12 hours in a warm place and it will then be ready for bottling.

Medicine
The plant has long been used, like other bitters, to stimulate the appetite and aid in digestion. It was prescribed for digestive problems and intestinal complaints by Greek and Roman physicians. The Chinese also used it as a digestive aid, and a treatment for leprosy, tuberculosis and dysentery. North American Indians used the native American hop as a sedative and sleep aid.

Castleman comments that hop farmers noticed that the plant had two effects on those who harvested it: it made them tired and it brought on women’s periods. Thus it became known as a sedative and menstruation promoter. Hop is frequently added to sleep pillows.

My daughter finds a very hoppy beer, like India Pale Ale, effective to soothe menstrual cramps. It’s far more effective for her than Midol or motherwort. This may be because hop has antispasmodic qualities. Some researchers also believe it contains chemicals similar to estrogen.

According to Castleman scientist have found two chemicals in hop (humulone and lupulone) that kill the bacteria that cause spoiling. They are also effective against tuberculosis bacteria, as recognized by the Chinese. And in 1983 a sedative chemical was discovered in the leaves--its concentration increases as the plant dries.

According to Funk & Wagnalls, in Bohemia, an oil of hops is used to fill cavities, while the Magyars mix privet and hops in wine for toothache.

Food
The Romans used to eat the young shoots of the hop plant before they matured. They were prepared like asparagus.

Folklore & Myth
Paghat has a wonderful article on hop (she grows the golden variety) in which she traces the name Humulus lupulus to the maenadic cults of Cybele and Dionysus.
http://www.paghat.com/hop.html

The species name lupulus means “little wolf,” perhaps because the plant strangles other plants as it climbs on them. It is also sometimes known as “willow wolf” since it loves to grow in the same moist soil where willows grow and will use their dangling branches for support, according to Chelsie VandaVeer’s article:
http://www.killerplants.com/whats-in-a-name/20030530.asp
This article also features an ad for hops which shows a wonderful shaggy vine growing on a ramshackle shed.

It was customary in the hopfields of Kent for anyone visiting for the first time to contribute “foot money” lest the luck leave the fields. In Chestertown Maryland, the hope vines are said to peep out of the ground at midnight on old Christmas (Jan 6). This would be the time of the year when they have died back to the roots. [F&W]

Great article, I appreciate the section on mythology as well. One interesting correction however, that hops grow on a "bine" climbs by wrapping its shoots around a support, not a "vine" which climbs using tendrils or other specialized appendages.