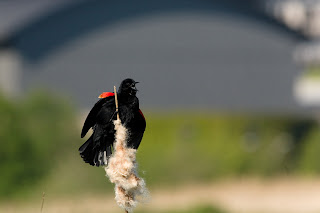 On May 14, I attended the Environmental Writing workshop sponsored by the Burke Museum.

I especially enjoyed the workshop taught by Lynda Mapes who writes a column called Natural Wonders for the Seattle Times. She taught us the techniques she uses to prepare for writing these articles, which she calls immersion reporting.

She begins with research, including looking at old maps, current maps and books on the subject. When observing the subject, she suggested: 1) show up and be quiet and be present for at least three minutes 2) take notes and 3) background the subject: look at everything that is happening around it. Then she organizes her notes, outlines her article and walks away from it (usually overnight) before revising for the final publication, which includes fact checking and sentence polishing.

Then she sent us out into reclaimed area south of the Center for Urban Horticulture, which was once a gathering place for local tribes, then a dump for the City of Seattle, and currently a recovering wetlands known as Union Bay.

I was particulary struck by the cattails which lined the ponds and took copious notes about them. The seedheads reminded me of cotton candy, and when I touched them, they felt like spider webs, sticky and capable of being teased apart only with difficulty.

I was also struck by these striking birds with red bars on their wings swooping all over the marshlands. I had only seen a red-winged blackbird once before, in Wisconsin, and had no idea they lived in Seattle. It turns out they love marshland and build their nests, partly with the cotton fluff from the cattails, near the water.

Thanks to Doug Plummer for permission to use his photograph which is one of many beautiful photos featured on his web site in his daily photos.
Posted by Waverly Fitzgerald at 5:38 PM
Email ThisBlogThis!Share to TwitterShare to FacebookShare to Pinterest
Labels: cattail, red-winged blackbird