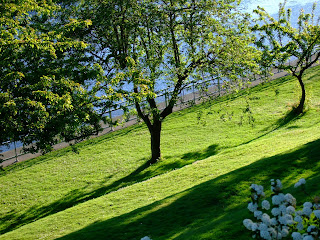 Cross posted at my other blog.

Upcoming this Sunday, April 22: Earth Day which also coincides with one of the original dates of Arbor Day.

Earth Day is a fairly new holiday. Earth Day was first proclaimed on March 21, the Spring Equinox in San Francisco in 1970. Doesn't that seem perfect? The spring after the Summer of Love. Just a few weeks later, also in 1970, Senator Gaylord Nelson, a Senator from Wisconsin, called for an Environmental Teach-in (modeled after the Vietnam war sit-ins) on April 22, which had been celebrated for many years as Arbor Day.

Arbor Day is almost one hundred years older than Earth Day, but still young for a holiday. In 1872, J. Sterling Morton, the Secretary of the Nebraska Territory, declared April 10 a day for planting trees (according to this history compiled by the Arbor Day Foundation). In 1885, it was declared a legal holiday in the State of Nebraska and moved to April 22, Morton’s birthday. It was adopted as a holiday by other states but the date has varied, depending on when tree planting is ideal. It is now usually celebrated on the last Friday in April but it seems to have fallen out of favor as Earth Day has gained popularity. 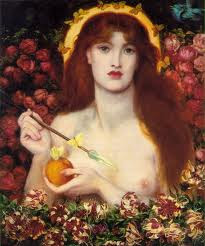 Although Arbor Day and Earth Day are relatively new holidays, they align with many older traditions. There are many ancient April festivals which honor the goddess as garden guardian (Venus Verticordia on April 1) and Earth mother (Megalisa on April 3, Cerealia on April 13, and Fordicalia on April 15). April is also the month of St. George (his feast day is April 23), the dragon slaying saint. For centuries, the celebrations in honor of St. George have associations with verdant nature. The very name George means farmer.

In Carinthia and Transylvania, a birch tree or willow tree, decked with flowers, is called Green George. Sometimes a boy is dressed up in branches, leaves and flowers. 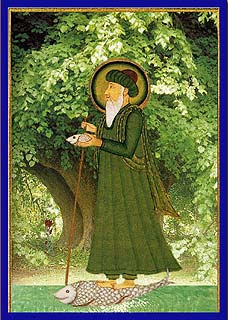 Albanians slaughter a lamb on this day and smear blood on sills (recalling the Jewish holiday of Passover) to protect them from evil. Before an icon of St George, they pray: "Holy St George, this year thou hast sent me this lamb, next year, I beseech you, send me a larger one." People go on picnics and weigh themselves holding sprigs of green. St George or Mari Ghergis is the most popular saint in Egypt where he is associated with El Khider, the green man, who appears to travelers who are lost or in despair.

Mrs Sharp (an alter ego of Sarah Ban Breathnach) celebrates Earth Day by doing an inventory garden tools and supplies. She makes presents of gardening gloves and other accessories. Each of her children has a tree, and on this day they clean around their own tree and tie a ribbon on the trunk to honor it.

On the very first Arbor Day, more than one million trees were planted in Nebraska. Planting a tree can still be a great way to celebrate.

Or you can simply admire trees. Go on a tree walk like the one I took two weeks ago at the University of Washington with our local plant and tree expert, Arthur Lee Jacobson. 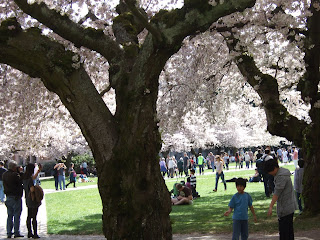 I was delighted when we entered the quad which is famous for its flowering cherry trees and found it thronged with people. Students were lounging on the lawns. Japanese families were taking photos of their young ones under the trees. The profusion of pink flowers seemed like an ample reason for celebration.

If you don’t have a knowledgeable guide, the Arbor Day Foundation provides this useful key which will help you identify trees.

In honor of Earth Day, experiment with eating only local food. Determine what foods are available within 250 miles of your home and create meals based on those foods. Find out where your eggs come from. Visit a local farm. Stop at a roadside stand. Invite your friends for a feast or a potluck to celebrate local foods.